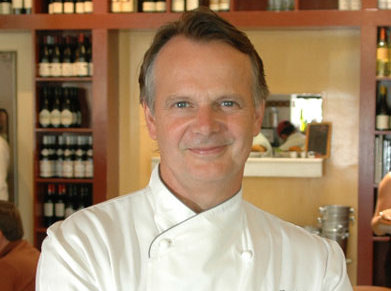 R.W. Apple wrote in The New York Times that Frank "sniffs out prime regional ingredients -- flippingly fresh seafood from the Gulf of Mexico, fruits and vegetables from Alabama farms, stone-ground grits, plump quail from the Carolinas -- and cooks them with French finesse.”

Frank Stitt did not set out to be a chef, but although he studied philosophy at Berkley during the 1970s, he met Alice Waters and was sold on food. During his subsequent culinary career Frank accrued local, regional and national gastronomic awards and a favorite son of Alabama, his home state.

Frank’s fondness for humble southern ingredients comes from his own rural roots, but also from his attraction to the south of France. After college, his travels took him to  vineyards in Provence as well as Burgundy and when he finally came back home to Alabama, the foods and traditions he had encountered in France became part of his vision.

His first restaurant in Birmingham, Highlands Bar & Grill, opened in 1982, where he combined French technique and the seasonal flavors of "both souths"— the local south and the south of France, Even though Highlands filled a fine dining niche, Frank wanted to experiment with the flavors he encountered in Italy, Greece and Spain. Thus Bottega and Café Bottega, located in an Italianate mansion in Birmingham, were born.

In 2011, Chef Stitt was inducted into Esquire’s "Restaurant Hall of Fame" and to the James Beard Foundation’s “Who’s Who of Food and Beverage in America”. Highlands Bar and Grill was nominated for the sixth consecutive year by the James Beard Foundation for the Outstanding Restaurant Award in 2014. Stitt received the James Beard Award for Best Chef: Southeast in 2001, and was nominated in 2008 for Outstanding Chef. Chef Stitt has received the Lifetime Achievement Award from the Southern Foodways Alliance and was inducted into the Alabama Academy of Honor in 2009, the most distinguished award given to an Alabamian. He has appeared on the Martha Stewart Show, PBS’s Chefs A‘Field, ABC’s Nightline and the CBS Early Show. His restaurants are regularly featured in top national and regional outlets such as The New York Times, Men’s Journal,Esquire, Food Arts, Men’s Health, Saveur, Cooking Light, Wall Street Journal, Food & Wine, Southern Living and Garden & Gun.

Stitt lives in Birmingham with his wife and business partner, Pardis. He has two children, Marie and Weston. The Stitts have a working farm about an hour away from Birmingham, where they raise chickens, gather eggs and grow produce for use in all of their restaurants.