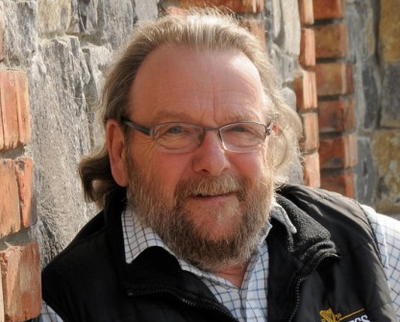 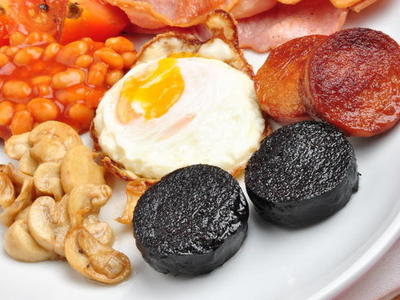 Born in 1941, Taylor was brought up in Bangor, Northern Ireland, and receieved his medical education in Ulster. He initially practiced in a rural Ulster village akin to Ballybucklebo before taking specialist training in Obstetrics and Gynaecology. After living in Belfast through the first two years of the recent Irish Troubles (1969-1994) he and his family emigrated to Canada where he pursued a career in medical research and teaching in the field of human infertility. His contributions have been honoured with three lifetime achievement awards including the Lifetime Award of Excellence of the Canadian Fertility and Andrology Society.

A talent for the written word, first recognized when he was 16 by his winning the “Campbellian Prize for Literature”, led to an outpouring of contributions to the medical literature. His scientific works include 170 papers and six textbooks, one translated from the original French. For ten years, (1991-2001) he was editor-in-chief of the Canadian Obstetrics and Gynaecology journal.

To add leavening to dry, academic prose Taylor has always nurtured his creative side. His monthly medical humour columns which began in 1991, En Passant, Medicine Chest and Taylor’s Twist were followed by his appointment as book reviewer to Stitches: The Journal of Medical Humour. 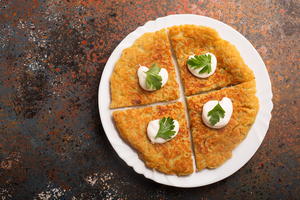 Learn how to make a deliciously Crispy Flourless Potato Cake that will take you all the way back to Ireland. This incredibly easy and perfect side dish - your friends and family will absolutely love the taste of this Irish recipe. 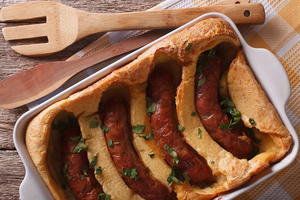 Toad in the Hole

The country folk claim that this dish came by its name because it resembled a toad ormaybe a frog peeping out of a hole when it had awakened from hibernation. Then whenit climbed out of the mud, leaving an imprint of its shape behind, it was just like removinga sausage from the batter in which it had been cooked. Ma says they did not actuallyeat toads, which are prob ably quite poisonous, but they used any bits and pieces ofleftover meat or sausages baked in the batter, which helped to make a meager amount offood feed more mouths. 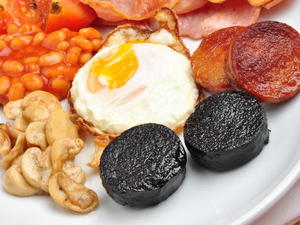 The Ulster fry dates back to Victorian times and the English version was included in Mrs. Beeton's Book of Household Management. An Ulster fry was usually eaten at breakfast time and was regarded as the best meal to set you up for a hard day's work or for play. There was also a belief that it was a good cure for a hangover. In Ulster most restaurants and pubs now serve the Ulster fry at any time of the day.Black pudding is usually included in an Ulster fry and is made from pork blood, oatmeal, pork fat, spices, and onion, encased in a sausage skin. It is an acquired taste and some people prefer white pudding, which is similar but does not contain blood.White pudding, however, is not traditionally part of an Ulster Fry.Regional variations are known as a Full English, a Full Scottish, or a Full Irish and there are differences between them. The English and Scottish breakfasts will include baked beans and sometimes mushrooms. The Full Irish includes white pudding. 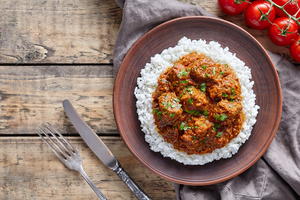 Patrick Taylors father, Squadron Leader Jimmy Taylor, RAFVR, had been stationed in Basra during the Second World War. An Indian regiment was part of the garrison and the officers messes entertained each other. While the Hindu soldiers were vegetarian and ate vegetarian curries, the RAF cook house had created one using corned beef as yet another way to serve the tinned meat, which was in plentiful supply (whereas fresh meat often was not). Jimmy was so impressed with the dish that he obtained the recipe and it was a popular meal at home after the war when Patrick Taylor was a boy. 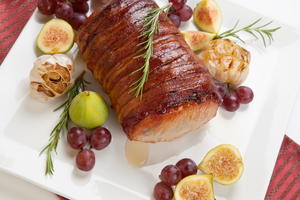 Editor's Note Your dinner options just became a whole lot more exciting with this incredibly delicious Stuffed Pork Tenderloin recipe. Your family will love the wonderful flavor this this pork tenderloin recipe brings to the table! The flavor of the mushrooms, bacon, and tender pork are a powerful flavor combo. Be sure to make this for dinner this week, you'll thank yourself after! 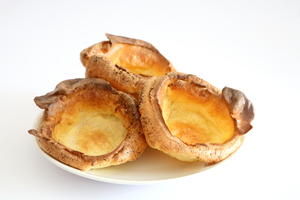 Yorkshire pudding is traditionally served with roast beef and is a similar batter to that used in the Toad in the Hole recipe. In poorer families, both, indeed, had a similar purpose. With the Toad, the intention was to make a small amount of meat stretch a bit further, while the Yorkshire pudding was often served before the meat course, thus providing a cheap way to take the edge off of the appetite and make the more expensive meat go further. In poorer households, the Yorkshire pudding served with gravy was often the only course. Doctor OReilly tells me that it dates back to the eighteenth century and came from the North of England. He likes me to serve it with a lamb roast fillet or roast pork, as well as roast beef. 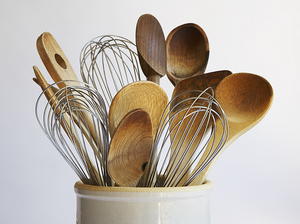 Editor's note This recipe for Irish Country Chicken Breasts is ideal for St. Patrick's Day or any other day that you're craving taste of rustic Ireland. 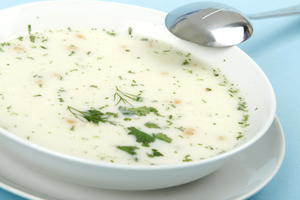 Curl up by the fire this winter with a big heaping bowl of this delicious Creamy Chicken Soup! This recipe is everything you love and more in one pot and it's incredibly easy too. This Irish recipe from James Taylor is one to keep forever, we're sure you'll love this easy chicken soup recipe! 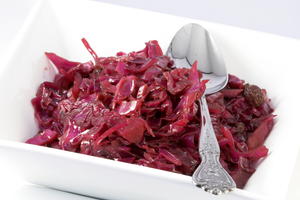 Editor's Note Add some color and flavor to your dinner table with this classic Irish recipe for Spicy Red Cabbage. It's incredibly easy to make, you'll be pleasantly surprised! Place everything in a pot and let it sit for a few hours to soak up the amazing flavor. This can be prepared well in advanced and frozen for another time without any worries at all. 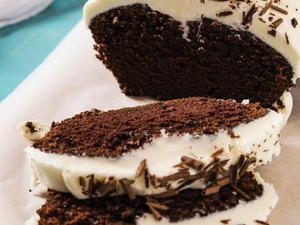 Editor's Note Sweeten up your sweet tooth with this delicious Dark Guinness Cake With Jameson Cream Icing! It's rich, chocolatey, and everything you'd want in a dessert. This Irish cake recipe is one for the books, be sure to save this for your next occasion. The Jameson Cream Icing is a must for this decadent cake recipe. The combination of the rich chocolate (and Guinness) cake and the Jameson cream icing is a match made in heaven!

Editors note This delicious recipe for Chicken with Green Peppercorns is a versatile meal that works well for a weeknight supper or a special occasion.

Editor's Note This recipe for Chicken Liver Pt is an elegant edition to any dinner party.

This is a nice accompaniment for a roast beef dish or a simple weekday sausage meal. 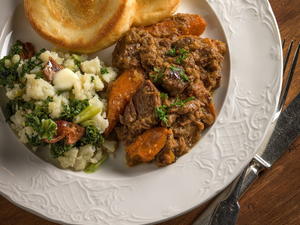 For a hearty Irish stew recipe that will get you through even the coldest days of winter, look no further than this savory Beef and Guinness Stew. The stew cooks slowly for up to three hours, allowing the flavors of the Guinness to become infused with the beef. The beef cooks up tremendously tender and is complemented perfectly by the starchy root vegetables. The end result is a stew that is hearty and savory, perfect for any icy winter evening. Serve this dish with dumplings or cobbler for an authentic Irish supper.

Traditionally, soda bread was shaped into a round and placed into a greased iron pot called a Bastible. This looked rather like a Dutch oven and was hung over the fire in the hearth.

This is a very tasty and easy dish that Ma used to make in the summertime when the herrings were in season. We had a travelling fish seller who came every week in his horse and cart, and his cry of, "Ardglass herrings, Ardglass herrings! brought the delighted house wives onto the street to buy his fish. Ardglass was, and still is, a famous fishing port on the Irish Sea near to the mouth of Strangford Lough where himself likes to go wildfowling. It was handy to have these herrings ready in the refrigerator when the Doctor was on call and I could never be quite sure when he would return from his home visits. These will keep for several days in a refrigerator and taste even better after leaving overnight. Herrings are members of the sardine family and have lots of little bones. Somehow they just seem to melt when cooked like this.

Editor's note For a zesty and flavorful weeknight meal, try your hand at this Lemony Chicken with Mustard Sauce. It's a recipe that is sure to become a family favorite.

Ma was very fond of this dish and of course it always seemed different depending on the fish used. And what a variety of fish the local fishermen brought in. She did, however, use strong country cheddar cheese instead of Parmesan. 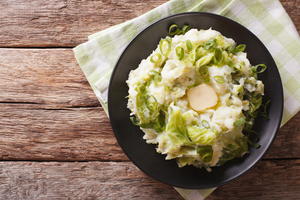 From the Irish cal ceannann meaning "White-headed cabbage." In some parts of Scotland it is called rumbledethumps.

For a rich and luxurious dinner, put your culinary skills to the test and try this recipe for Beef Wellington. The beef is coated in a flavorful duxelles and wrapped in pastry dough. The end result is a piece of juicy, tender beef wrapped in flaky pastry. The savory, earthy flavors of the duxelles add a rich and comforting feel to the dish. This recipe for beef wellington is best served with roasted or mashed potatoes and a side of wilted greens. This luxurious meal is one that is sure to impress and house-guest. 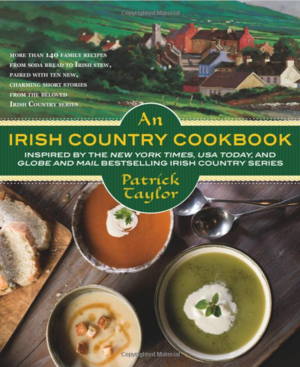