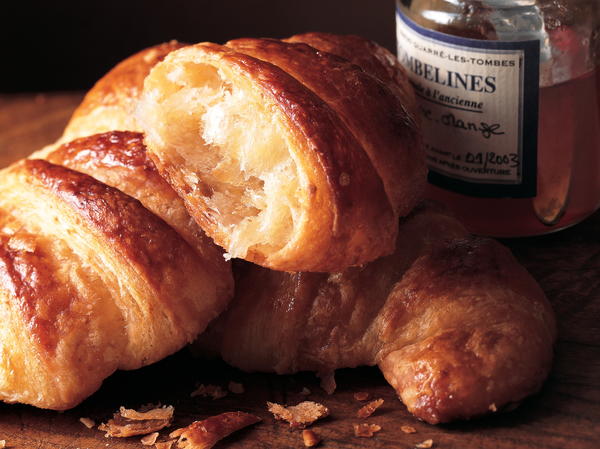 A well-made croissant has a crisp crust and a somewhat flaky crumb that is soft but never doughy. Croissant is actually the missing link between puff pastry and brioche. Take puff pasty dough, add some yeast, and you have croissant dough. Take brioche dough, add as much as almost double the butter, replace the eggs with milk, and you have the makings of croissant dough. Some people think of a croissant as a pastry, others as a bread. Most don’t think much about it at all, they just eat it with great pleasure. Since this recipe first appeared in The Pie and Pastry Bible, I have received countless e-mails from home bakers eager to make the dough but unable to find the “reduced-bran whole wheat” called for. I used that flour because it offers a sweet, slightly nutty flavor and beautiful golden color without the bitterness of heaviness of texture of 100 percent whole wheat flour. Reduced-bran flour, available commercially in large quantities, is simply whole wheat flour with most (98 percent) of its sweet, flavorful germ still in it but only 20 percent of its bran—just enough to add flavor intensity without bitterness. Once I investigated flour mill in depth, I realized that it’s a simple matter to add this amount of germ and bran back to white flour to make your own reduced-bran flour! This recipe makes it possible. In fact, since I am adding the coarse bran and germ separately, I incorporate them into the butter package. The butter coats their sharp edges and helps to keep them from cutting through the gluten network of the dough. Of course, if you prefer a traditional croissant, just omit the germ and bran. Now that high-fat European-style butter is nationally available to home bakers, it makes it a lot easier to produce quality croissants. Because the butter is more pliable even when cold, it’s easier to roll the dough. I also find I pefer the lighter texture of a croissant dough made with less of this rich butter. Classic croissants are given a total of four turns (business letter folds). But if the butter starts breaking through the dough, it’s fine to stop after three turns; you will still have plenty of flaky layers. The fact that the butter breaks through the dough layers is what makes the croissant so much more tender than puff pastry where the butter layers remain perfectly moist.     Rectangles of Wheaten Croissant dough wrapped around small rectangles of bittersweet chocolate make a delectable variation on the traditional white-flour pains au chocolat. They are most delicious when eaten still warm from the oven when the chocolate is still slightly melted. Of course, they can be reheated to achieve this same effect. Use your favorite bittersweet chocolate. I prefer a milder chocolate, not one that is too bittersweet, as it would contrast too sharply with the dough.

Higher-fat European-style butters, such as Vermont Cultured butter, Plugra, or Land O’ Lakes “ultra” butter, contain less water than our regular butter so they stay pliant in the dough even when cold. Vermont Cultured butter contains 86 percent fat, the highest butterfat of all American brands. Because it is “cultured,” it has a lower pH level (higher acidity), which makes it especially soft and pliant, ideal for rolling into the dough without breaking through the layers.

Flour with too high a protein content (over 12.5 percent) makes it harder to roll the dough and results in a chewy texture. It is also important not to knead the dough to the point where it becomes very elastic, as with each rolling and folding it becomes more stretchy and harder to roll.

If you have a Cuisinart mini processor, you can reduce the size of the bran and germ by processing them with the 1 tablespoon of the flour before adding it to the butter.

You can use up to 9 ounces/ 255 grams butter. It’s easier to roll the dough if you use the smaller amount listed in the recipe. I prefer the lighter texture it gives the croissants, and the flavor is still very buttery.

A tutove (ridged) rolling pin can be used, for added ease in rolling, for the first four turns, after which the dough layer becomes too thin, and the butter could break through.

Make each turn after 40 minutes of chilling, but no longer. If the dough is too cold, when you roll it, the outside of the dough softens while the center remains firm, which makes it hard to roll and destroys some of the layering. Once you have completed all the turns, however, the butter is evenly dispersed in thin sheets so the dough stays evenly pliant.

Brush off all loose flour when rolling, and keep the unused dough covered to avoid crusting, which would cause separation of the rolled layers during baking The inside of the croissant should consist of numberous little open cells with no visible striations.

If the room is cool (68°F or under), it is desirable to leave the rolled dough covered on the counter for up to 30 minutes to relax before the final shaping.

Although a tightly rolled croissant with the classic 7 distinct sections is attractive, I find that the texture is lighter and better if they are not rolled too tightly.

After proofing and egg glazing the croissant (so your fingers won’t stick to the dough), to get a more pronounced curve, very gently recurve the ends inward.

Unbaked croissant dough can be refrigerated for 2 days. Baked croissants or pains au chocolat can be held at room temperature for a day or frozen for several months. Reheat them in a preheated 300°F oven for 5 minutes (8 minutes if frozen).

If you have cushioned cookie sheets or enough to stack one on top of the other to make a double-layered baking sheet, it helps keep the bottoms of the croissants or pains from getting too brown.

Water: 64% (includes the water in the milk and butter) 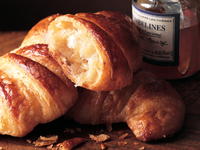 What do you do with the balls of scrap dough?