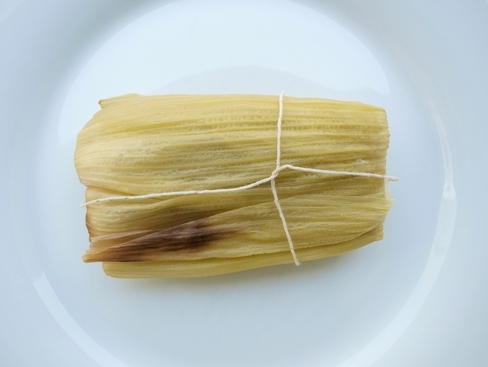 The tangy and refreshing qualities of tomatillo seem to work best with chicken, and they are often paired to form the base for a large variety of tamale fillings. Tomatillos instantly invigorate leftover chicken, even meat that’s been cooked a long time to make a broth. If you already have some chicken broth on hand for the batter, you can also use leftover roasted chicken or, of course, fresh chicken, as long as you cook it before mixing it into the tomatillo sauce. These dumplings are wrapped using the single-husk tamale fold (see Notes).

The single-husk tamale fold shapes tamales into compact rectangular packages. Dried corn husks are often quite large and can easily wrap around big spoonfuls of batter and filling. If your husks are smaller or torn, however, you can overlap two husks and still complete the fold.

1. Lay flat one corn husk, smooth side up. Center the batter on top of the husk and spread it out toward the right side until you have a rectangle about 4 × 2½ inches.

2. Arrange the filling on top of the left half of the batter, leaving the right half without any filling.

3. Fold the right side over, sandwiching the filling inside the batter.

4. Fold over the left side.

5. Fold the ends of the husk over as firmly as you can to create a neat rectangular package.

6. Tie the package in a crisscross pattern to prevent the husk from unfolding.

Corn husks: Fresh husks pulled right off the cob are convenient and lightly scented wrappers for batters consisting entirely or partly of fresh corn kernels. Fresh husks from sweet corn are typically narrow and not too long, so you will need to overlap them in order to accommodate the batter or filling you’re working with. Dried husks, however, are larger, because they are generally made from the husks of sizable field corn, not sweet corn. They can be found, usually folded up, in many markets, especially Mexican, Caribbean, or South American groceries, specialty food markets, and well-stocked supermarkets.

Preparing dried corn husks: Count out the number of husks needed for your recipe. Unfold them just enough to count out the number that you need, trying to avoid tearing or cracking them apart. Fill a pot large enough to fit the husks at least halfway with water and bring to a boil over high heat. Remove from the heat. Sink the husks in the hot water, cover, and soak for 1 to 2 hours, turning occasionally for a more even soak. Drain, unfold, rinse each husk under cool running water, and wipe dry. Keep covered under a damp towel until ready to use. 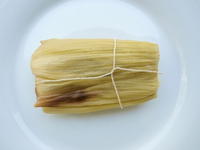 This tamale recipe is one of my favorites ever! My family comes from Mexico, and my grandma cooks tamales all the time! However, as a second-generation child, I don't know how to make it on my own. I've never learned, and my family makes it less and less nowadays. So, I'm really glad that you've included this recipe on your blog. Not only does it help other people try other culture's foods, but I can make my own!