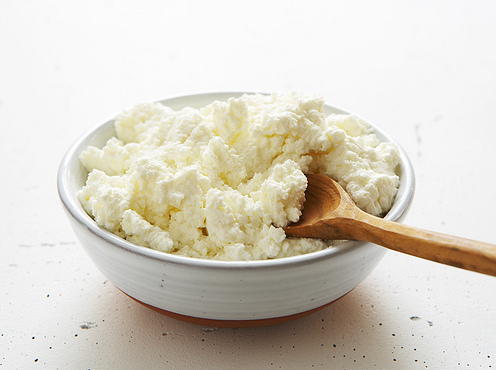 You may be familiar with saag paneer, a standard in Indian restaurants in America. This dish is made with peas instead of spinach and the cubes of paneer (fresh Indian cheese) are cooked with the peas and a thin tomato sauce which has a beautifully light, silky texture (it’s almost thin enough to be a soup). Because of the way the spices are cooked into the dish, it has an elegant and complex flavor. Serve with rice and Stir-Fried Cauliflower and Potato with Crunchy Bengali Spices.

Paneer is traditionally made by bringing whole milk to a boil and curdling it with lemon juice, vinegar; or yogurt. Then the whey is drained off and the curds are wrapped in cheesecloth and weighted to compress the cheese into a firm cake. I’ve simplified this process by starting with ricotta cheese instead of milk and then baking it to firm it into cheese.

NotesGaram Masala: The most important spice mixture used in northern Indian cuisine. It goes particularly well with onion-based sauces for meats and poultry but it is used to flavor many other dishes, including vegetables, chaots (snacks), dais (legumes), and raitas. Sometimes the spices are used whole and simply cooked into the dish. Or the spices are toasted and then ground together into a blend (as in the recipe below) and the mixture is stirred in at the end of cooking. Although garam masala is not as fiery hot as some Indian spice blends, black pepper, cloves, and cinnamon give it a different kind of heat that comes on slowly and lasts awhile. Since many of the recipes in this’ book use garam masala, it’s worthwhile to make a good quantity to have on hand. You can keep it for up to 3 or 4 months in an airtight container. This is my favorite blend:

Combine the cinnamon, bay leaves, cumin, coriander, cardamom, peppercorns, cloves, and red chile in a frying pan and toast over medium heat, stirring constantly, until the cumin turns uniformly brown, 4 to 5 minutes. Put into a spice grinder and grind to a powder. Stir in the mace and store in an airtight container.