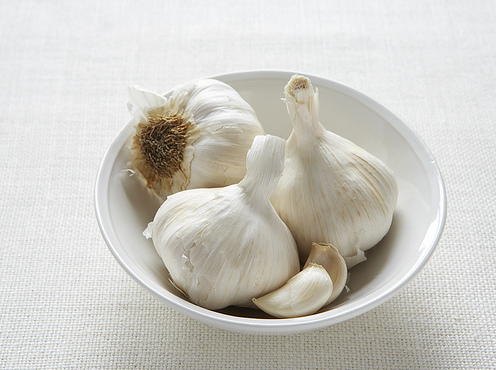 It's not often that a peanut butter and banana sandwich will inspire a spicy grilled chicken dinner. But such was the case one recent afternoon, when I was simultaneously preparing one meal and daydreaming about the next. I had just lugged home a brand-new cast-iron grill, so naturally, as I smeared peanut butter onto seven-grain for lunch, I was also contemplating grilled chicken legs for dinner. I could just picture myself standing on the deck at dusk, gin gimlet in one hand, oversize tongs in the other, flipping drumsticks cloaked in crisp skin that was ever so slightly, seductively, charred around the edges. Fragrant smoke wafted around me in my mind, and I inhaled the aromas of sizzling chicken. And garlic. And ... um ... The shimmering fantasy faded. What else besides the garlic could I massage all over those fleshy legs? That's when I noticed the recipe on the cap of extra-crunchy. Peanut sauce, it read, good for noodles and chicken. The ingredient list contained garlic powder, soy sauce, cayenne, and granulated sugar. I could practically taste it-a cloying, stick-to-the-roof-of-the-mouth paste. But it did spark more delectable memories, like a peanut satay sauce for chicken. Indeed, a spicy, chile-flecked peanut concoction slathered over the chicken legs was starting to sound mighty appealing. Except that I had finished the last of the peanut butter and there weren't any peanuts in the house for me to grind up. But an excavation of the cupboard revealed a jar of cashews. Why not use those instead? It was easier than going to the store. The dish was starting to take shape. Since I had to dirty the blender by grinding the nuts, I figured I'd grind up the rest of the ingredients, too, which would save me the trouble of mincing and mixing. Then I poked around the kitchen for other things to add. Garlic was a must and in plentiful supply, so I tossed in four fat cloves, along with some jalapenos I keep around in the summer for emergency guacamole. Here's something I've learned about jalapenos: These days, most are bred as bland as bell peppers. So I never automatically seed them, because the seeds and veins contain most of their heat. But occasionally, you encounter a really fiery specimen. My rule of thumb is to halve a pepper and lick the guts. If there is a mild sting, I leave in the seeds. If I leap up screaming, I consider deseeding. Also in the fridge for guacamole-making was the end of a bunch of cilantro. There weren't enough leaves left to make an impact, so I threw in some of the stems as well, which have an intense flavor of their own. I needed to add some liquid, too, for a proper consistency. Soy sauce was a good idea (thanks, Smucker's) and so was fresh lime juice, which would pair well with my gimlet. I also added some oil to help distribute the flavors and keep the chicken skin from sticking to the new grill grate. I whirled it all together and applied half to the chicken, leaving half to serve as a sauce alongside. When the sun started to set, I lit the charcoal and waited for it to glow. Then I added the chicken, carefully tending it while gimlet sipping, just as I imagined. Those drumsticks rolled off the grill as juicy, tender, and burnished as I could have hoped for, and the cashew sauce was even more marvelous than most peanut satays. It had a salty, buttery richness that tamed the intense heat from the chile, and a touch of sweetness from a dash of brown sugar that I added at the last minute. It all got me thinking about my next meal, breakfast. Maybe a berry-yogurt-banana parfait with chopped toasted cashews? Thus the happy cycle continues one meal into the next.