The Japanese Kitchen: 250 Recipes in a Traditional Spirit 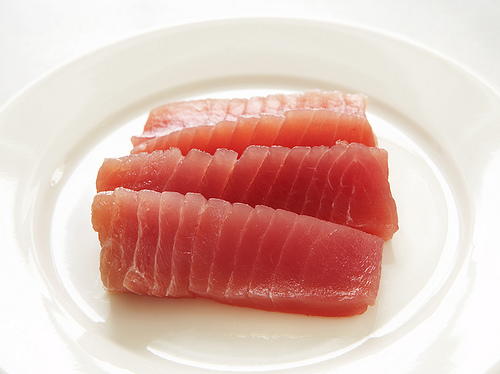 Archaeological remains indicate that maguro, tuna, has been eaten in Japan since ancient times. But it was relatively recently, toward the end of the Edo Era (1600 to 1868), that tuna gained its present popularity. Thoroughly cooking tuna firms and dries its flesh. In Japan, therefore, tuna is eaten mainly as sashimi or in sushi, although there are some traditional recipes in which tuna is cooked. Recently tuna has become a popular fish at restaurants outside Japan, both Japanese and non-Japanese. The most popular new style of preparation is searing. I suppose this method was born out of a Japanese chef’s search for a good way to serve sashimi-quality-fish to clients who might resist ordering raw fish. To sear fish is to cook the surface quickly, with intense heat while barely cooking the interior. Searing can be done with any heat source, wet or dry. In this preparation I marinate tuna, coat it with sesame seeds, and then sear it in oil. Cutting the cooked tuna requires a little practice, since the outside of the cooked fish easily falls apart. Let the cooked fish stand for 10 minutes, and then cut it with a very sharp knife, such as a meat slicer. Serve the sliced tuna on a bed of salad greens.

Sashimi is thin-sliced, very fresh raw fish. Fish is also often used raw in sushi. Any fish that is to be eaten raw should be very fresh. Freshness depends only partially on when the fish was caught. Suppose you go to the fishmonger around ten in the morning, and the fishmonger tells you that a fish was caught early on the same morning, so it is very fresh. Does this mean the fish is fresh enough to use in sashimi? The answer is maybe, depending on how the fish was handled after being caught and while it was being transported to the store. The most important thing is whether the fish was kept in an insulated case with plenty of ice from the time it left the ocean until the time you purchase it. Here are tips on determining whether a fish is fresh enough for use in sashimi, or any fish preparation.

The simplest way to enjoy sesame seeds, either black or white, is to toast them briefly, then grind them roughly. To toast sesame seeds, heat a skillet over low to medium heat. When it is hot, add the seeds and cook them, shaking the skillet occasionally, until the seeds are heated through and plump-looking, about 1 to 2 minutes. Roughly grind the seeds in a suribachi or smooth-walled ceramic or marble mortar, but you will have to work much harder to crush the seeds. Then sprinkle the seeds over plain cooked rice, or mix them with miso and spread the mixture over slices of hot toast. I believe that consuming a small portion of sesame seeds every day, whether with rice or with bread, contributes greatly to my health. 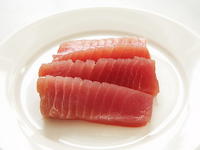