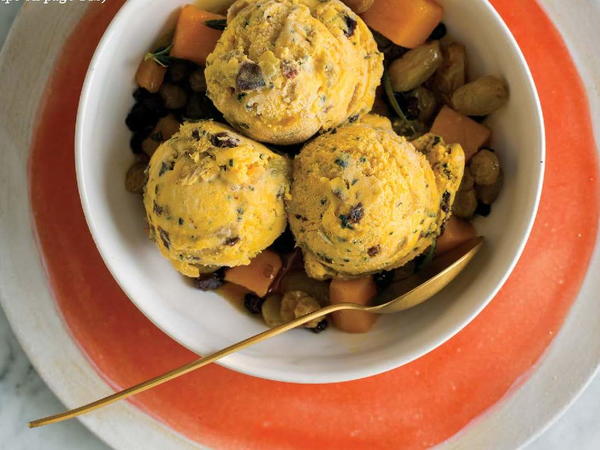 Often considered the property of Thanksgiving, the pumpkin rightly belongs to all of the cold months. Here, though, as tradition dictates, it is paired with a standard spice mix. See the Variations for some new interpretations.

PUMPKIN, ROSEMARY, AND RAISIN: Soak 1 cup of mixed golden and black raisins in boiling water until they are plumped, about 15 minutes. Chop 1 tablespoon of fresh rosemary needles very finely (I like to run them through my coffee mill). Drain the liquid from the plumped raisins. Omit the spices from the main recipe, and add the rosemary and raisins to the pumpkin base before the cream is folded in. Then proceed with the recipe as directed.

PUMPKIN PUREE: Pumpkin puree is easy enough to find in the market, but if you are interested in using up that jack-o-lantern, or you have some interesting squash on hand, why not make your own! There are a few methods that you can choose from. Peeled and diced, they can be tossed lightly in oil and spread out on a baking sheet, or boiled or steamed until tender. The boiled and steamed versions will take on a little extra liquid, so be prepared for that in your recipe. Smaller squash can be sliced in half, seeded, toasted, and then, when cooled, scooped from the skin.

PUMPKIN-AMARETTO: Pumpkin raviolis topped with crushed amaretti cookies and browned sage butter are a regular menu item in both the Lombardy and Emilia-Romagna regions of Italy. It might surprise you to find that, as an ice cream, these flavors really spring to life, too. Sauté ¼ cup of chopped fresh sage and ¼ cup of crushed sliced almonds in a tablespoon of butter until the herbs, nuts, and butter begin to brown. Remove from the heat and cool completely, then stir together with the pumpkin. Omit all the spices from the master recipe with the exception of the nutmeg, and proceed with the recipe as directed.

PUMPKIN-GINGER: Ginger is a frequent addition to pumpkin pie spice blend. But it is often overlooked as a featured flavor. Omit the spices from the above recipe, and replace them with ½ teaspoon of ground ginger. Then finely chop ½ cup of candied ginger and fold it into the base with the whipped cream.

CHUNKY PUMPKIN: If you are a fan of roasted pumpkin. dice and roast 3 cups with a little butter and salt until tender. Make the vanilla ice cream base on page 12, and fold in the roasted pumpkin and the above spice mix (for pumpkin-ginger) with the whipped cream. It’s the same idea, with a little different textural take. 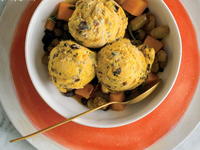