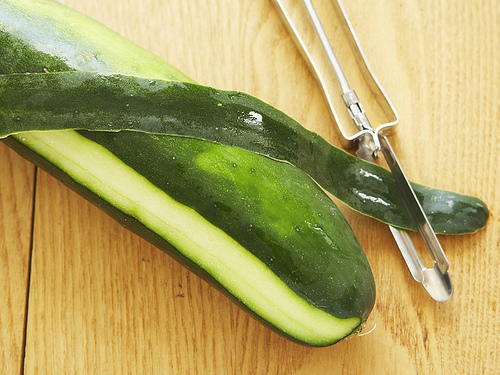 Throughout Central Italy, from Florence down to Rome, the most satisfying of salads is based on that old standby of the ingenious poor, bread and water. Stale bread is moistened, but not drenched, with cold water, the other ingredients of the salad you'll find below are added, and everything is tossed with olive oil and vinegar. The bread, saturated with the salad's condiments and juices, dissolves to a grainy consistency like loose, coarse polenta. Given the right bread—not supermarket white, but gutsy, country bread such as that of Tuscany or Abruzzi—there is no change one can bring to the traditional version that will improve it. If you have a source for such bread, make the salad with it in the manner I have just described.

NotesFor the Anchovies: The meatier anchovies are richer and rounder in flavor. The meatiest anchovies are the ones kept under salt in large tins and sold individually, by weight. One-quarter pound is, for most purposes, an ample quantity to buy at one time. Prepare the fillets as follows:

Rinse the whole anchovies under cold running water to remove as much as possible of the salt used to preserve them.

Take one anchovy at a time, grasping it by the tail and, with the other hand, use a knife gently to scrape off all its skin. After skinning it, remove the dorsal fin along with the tiny bones attached to it.

Push your thumbnail into the open end of the anchovy opposite the tail and run it against the bone, opening the anchovy flat all the way to the tail. With your hand, loosen and lift away the spine, and separate the fish into two boneless fillets. Brush your fingertips over both sides of the fillets to detect and remove any remaining bits of bone.

Rinse under cold running water, then pat thoroughly dry with paper towels. Place the fillets in a shallow dish. When one layer of fillets covers the bottom of the dish, pour over it enough extra virgin olive oil to cover. As you add fillets to the dish, pour olive oil over each layer. Make sure the top layer is fully covered by oil.

If you are not going to use them within 2 or 3 hours, cover the dish and refrigerate. If the dish lacks a lid of its own use plastic wrap. The anchovies will keep for 10 days to 2 weeks, but they taste best when consumed during the first week. Prepared in this manner, the fillets are powerfully good as an appetizer or even a snack, when spread on a thickly buttered slice of crusty bread.

For the capers: In Italy, particularly in the South, capers are packed in salt, and they taste better. They are available in markets abroad as well, particularly in good ethnic groceries. Their disadvantage is that, before they can be used, they must be soaked in water 10 to 15 minutes and rinsed in several changes of water, otherwise they will be too salty. They can not be stored for as long as the vinegar-pickled kind because, when the salt eventually absorbs too much moisture and becomes soggy, they start to spoil. The color of the salt is an indication of the capers' state of preservation. It should be a clean white; if it is yellow the capers are rancid.

For the onion: Sliced onion quickens the flavor of most raw salads, particularly those with tomatoes. To blunt its sharp bite, the onion must be subjected to the following procedure, beginning 30 minutes or more before preparing the other ingredients of the salad:

Peel the onion, slice it into very thin rings, put it in a bowl, and cover amply with cold water.

Squeeze the rings in your hand for 2 or 3 seconds, closing your hand tightly and letting go for seven or eight times. The acid you squeeze out of the onion will make the water slightly milky.

Retrieve the onion rings with a colander scoop or strainer, pour the water out of the bowl, put fresh water in. Put the onion back into the bowl and repeat the above procedure 2 or 3 more times.

After squeezing the onion for the last time, change the water again and put the onion in to soak. Drain and replace with a fresh change of water every 10 minutes, until you are ready to make the salad.

Before putting the onion into the salad bowl, gather it tightly in a towel and squeeze out all the moisture you can. 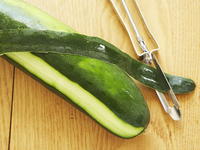