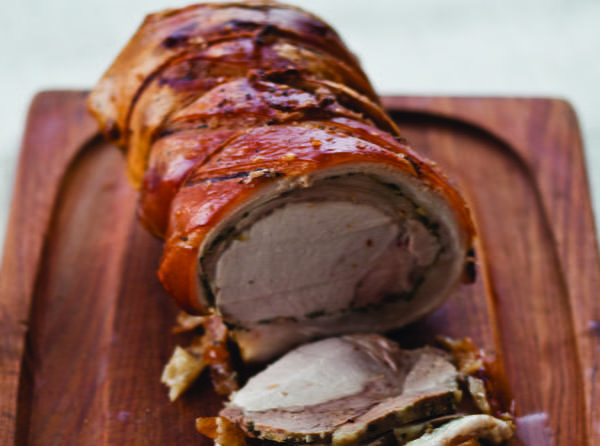 This image courtesy of Quentin Bacon

For years I’ve fantasized about making porchetta—herb- and garlic-infused pork roasted over an open fire until meltingly tender, with skin that’s crisp and crackly. In Italy, where the dish hails from, porchetta almost always begins with a whole pig, which gets gutted, boned, seasoned, tied, and spit-roasted to perfection. While I can be an ambitious cook, the prospect of wrangling a whole pig over an open fire in my small (and very wooded) yard always overwhelmed me. Then came an ah-ha! moment during a trip to New York City, specifically during a visit to a popular storefront eatery aptly named Porchetta. Waiting in line for my porchetta sandwich, I watched as the cook behind the counter sliced the meat, not from a whole pig, as I had always imagined, but from a single roast, albeit one unlike any I had ever seen. There was a large eye of juicy meat in the center, surrounded by an unctuous layer of dripping fat, all encased in crackling skin. Back home, I did some research and learned that Sara Jenkins, the talented chef-owner of Porchetta, creates her version by wrapping skin-on pork belly (the part of the pig from which we get bacon) around a pork loin. Brilliant! This version remains a fairly bold undertaking for most home cooks, mainly owing to the fact that pork belly, though super-popular with chefs, is not (yet!) a common supermarket cut (see Notes). Once you have the right cut, however, the only hard part is picking which of your friends and family deserve to come join you for such a delicious meal. (Do leave any fat-phobic folks off the guest list, as porchetta is hearty fare.) Serve the pork with sautéed greens (think spinach or Swiss chard) and something soft and comforting, like polenta, mashed potatoes, or white beans. Any leftover meat will make amazing sandwiches, especially when stacked on good crusty bread.

Plan Ahead: For the best flavor, season the pork at least 24 hours ahead of roasting.

Wine: A Nebbiolo-based red, like that bottle of Barolo or Barbaresco you’ve been saving for a special occasion.

To maket his porchetta, you will have to shop at a specialty meat market, one that goes beyond the standard supermarket fare. (Plus, the best porchetta is made from well-marbled, flavorful heritage breeds of pigs not found at most supermarkets.) Basically, there are three parts to a porchetta roast: the boneless loin roast, the belly, and the skin. Ideally the butcher will be able to give you all three in one piece: the pork loin and belly with the skin still on the belly. If not, you can buy a loin and a belly (with or without the skin) separately. Constructing the roast is not difficult as long as you have some kitchen string and a little understanding of how it goes together.

The loin is the thick, straplike muscle that runs along either side of the spine (parallel to the backbone); since we’re dealing with only one loin, imagine just one of those long back muscles. To grasp how the belly relates to the loin (and if it’s not too macabre for you to compare your own anatomy to that of a pig), place one hand on your own back muscle right near the bottom of your ribs (that’s the loin) and then slide your hand to the front of your body. Voila-there you are, the belly. So if the butcher bones out the loin without separating the belly flap from the back, you’ll have a pork loin with a long flap of streaky belly (fresh bacon) that you can wrap around the loin. (The British refer to this cut as a “long middle,” which makes sense, as it comes from the middle of the pig and, well, it’s long.)

I prefer the loin with the belly attached because it makes a neat porchetta. When you order the pork loin with the belly attached, ask the butcher to trim the belly fat down to just under a ½-inch-thick layer on the inside. Trimming the belly this way gives you the ideal balance of fat and lean. Also request a roast with the rind, or skin, attached. If the rind has already been removed, request a piece of pork rind large enough to wrap around the roast. (If the butcher shop has access to pork loin with the belly still attached, it should be able to get you a sheet of fresh pork rind as well.) Simply wrap this around the roast before you tie it in step 2 of the recipe.

Many meat markets, however, will not be able to provide you with a single pork loin-belly flap combo. In this case you’ll need to buy a separate boneless loin (preferably center-cut) and a slab of fresh pork belly that closely corresponds in length so it will wrap neatly around the loin. It’s impossible to give exact dimensions since every roast differs, but again, if you explain to the butcher what you’re after, he or she should be able to help. The belly should be long enough to cover the loin from end to end, but it doesn’t have to reach all the way around the circumference. For directions on wrapping the belly around the loin, go to step 1 in the recipe.

Serves10 to 12 with leftovers

Fantastic ! I've made Porketta before but never had the opportunity for the 'whole hog' which is what 'Porchetta means in Italian (roasted pig). However, in the spices I noticed one ingredient an Italian old-timer told to me to add, namely 'Dill Seed'. He suggested about three tablespoons. which I have used in my Porketta recipes. The pig flap or skin is another prospect worth trying as it is readily available from several markets here in Medford, Oregon. Nice touch !