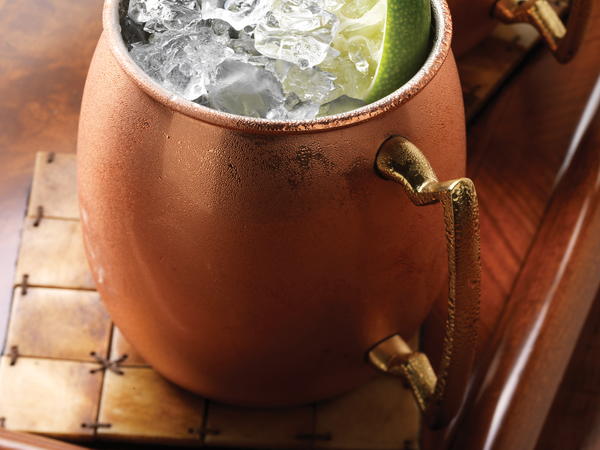 The Moscow Mule’s genesis was the serendipitous relationship between two gents, John G. Martin and Jack Morgan. In 1939 Martin acquired Smirnoff for a song from Rudolph Kunett-possibly because, in part, gin was the white spirit of choice, bar none. Morgan, owner of the Cock ’n Bull restaurant on the Sunset Strip in Hollywood, ventured to import ginger beer to the United States. Faced with the challenge of having to move an overstock of spicy ginger beer and the yet-to-be mainstream Smirnoff vodka, Martin and Morgan, along with Kunett, engaged in the creative process. Clementine Paddleford recorded Morgan’s telling of events for the New York Herald Tribune in 1948: “We three were quaffing a slug, nibbling an hors d’oeuvre and shoving toward inventive genius:’ The three of them played around with their respective ingredients until they settled on a hefty shot of vodka, a few ounces of ginger beer and a squeeze of lime in a mug filled with ice. Morgan continued,” It was good. It lifted the spirit to adventure. Four or five later, the mixture was christened the Moscow Mule-and for a number of obvious reasons:’ (Miller and Brown, Spirituous Journey: A History of Drink) Russian-style vodka combined with the likely “kick in the head” effects of consuming too much of the drink-the name works. The Moscow Mule was originally served in a signature copper mug embellished with a kicking mule. If your home bar is short a set of mule mugs, no worries. I am just as likely to reach for a Highball glass; it is delicious either way. In keeping with the original’s theme, I lean toward a bold, spicy, rye or mixed-grain vodka. Pairing it with the bold spicy tones of ginger beer prevents the spirit from disappearing from view. 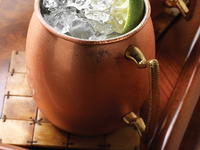 Of all the famous Russian food recipes, you had to choose the Moscow Mule (which was created by an American bartender)?