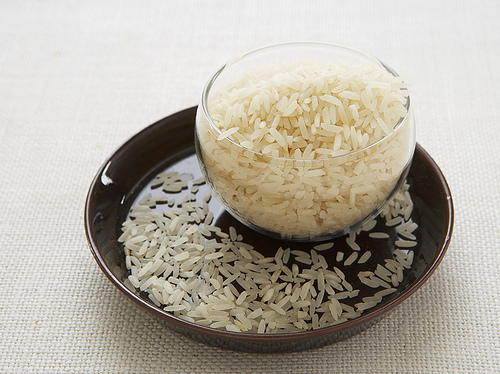 Sushi rice is called sumeshi (vinegar-flavored rice) or shari. Shari literally means “Buddha’s remains,” and it was so named because the very white appearance of the rice reminds people of Buddha’s mortal remains, to which the Japanese show great respect. You can use your freshly made sushi rice right away, but it is better to let it rest for one hour or so (to allow the flavor and texture to settle), covered with a moist paper towel in a Tupperware-like container with a lid. Float the container in a bowl of warm water, changing the water as it gets cold. The best-tasting sushi rice should be around 98°F when it is used. Never store it in the refrigerator, or the texture of the rice will be too firm and unfit for sushi making.

1. If your rice has formed a crust on the bottom of the pan, do not try to scrape that up and incorporate it with the rest. Next time, check that your heat is not too high for the first 10 minutes of cooking. You can tell whether the water is boiling away too rapidly; if so, adjust the heat and sprinkle a little more water over the surface (although adding too much water makes your rice too tender). Also, be sure that the heat is very low for the last 10 minutes of cooking.

2. If you cooked rice still has some uncooked firm grains here and there, even after you have sprinkled it with water and cooking it an extra minute or so, probably your lid was not tight enough and steam was escaping during the cooking. Next time, cover your pot tightly with aluminum foil before placing the lid on. Also, watch the heat: it probably was too high, so that moisture evaporated too quickly and some of the grains weren’t cooked.

If there are clumps in the rice that are hard to break down when you are tossing it, break them up by hand. Next time, make sure that the vinegar dressing is distributed evenly throughout the rice and that you work speedily tossing and turning it. Slowly worked and overworked rice becomes clumpy and pasty.

Japanese sushi chefs take as much care in choosing and preparing rice as they do fish and shellfish. You, too, will want to choose your rice with care.

But shopping for rice in a Japanese market can be bewildering. How do all those bags differ? Whether in Japanese characters or Roman letters, the labels may mean nothing to you. Here I what you need to know.

Tice varieties differ in their proportion of two types of starch, amylose and amylopectin. All Japanese rice is of the short-grained “Japonica” type, which has a higher proportion of amylopectin than does long-grained “Indica” rice and so is more moist, tender, and sticky.


Japanese cooks use two basic varieties of Japonica rice, uruchi-mai and mochi-gome. The starch in mochi-gome, also known as sticky rice, sweet rice, or glutinous rice, is nearly entirely amylopectin. When cooked, mochi-gome is very sticky; this is the rice that is pounded into soft, gooey rice cakes, mochi. Mochi-gome is too sticky for use in sushi.

Rice for sushi is uruchi-mai, the very same type of rice that Japanese eat every day. All uruchi-mai varieties are descended from two parent seeds selected in the Meiji era (1868 to 1911) and so are closely related. But the differences among these varieties are sometimes quite noticeable. Today the Japanese rice family tree has two branches, koshihikari and sasanishiki. The principal difference, again, lies in the proportion of the two kinds of starch. Sasanishiki has less amylopectin and so is less sticky and more firm when cooked than koshihikari. Many chefs prefer sasanishiki for nigiri-zushi, but others like to use a blend of the two types. For oshi-zushi (pressed sushi), tender, moist koshihikari is indispensable. Most Japanese prefer koshihikari as a daily table rice, too, and so its production is much higher than that of sasanishiki.

Rice sold soon after harvest, from October through February, is labeled shin-mai, new harvest. Exceptionally moist, tender, and fragrant, shin-mai is delicious as table rice, like fresh corn on the day it is picked. But in fall and early winter, shin-mai is too moist and tender for sushi. If not other rice is available during these months, spread the shin-mai in a broad, flat-bottomed colander and leave it in an airy, dry place for two or three days before using it for sushi. Shin-mai rice sold after the New Year should be dry enough to use immediately. 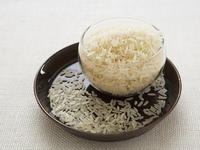