Lentils with Chiles, Pork, and Fruit 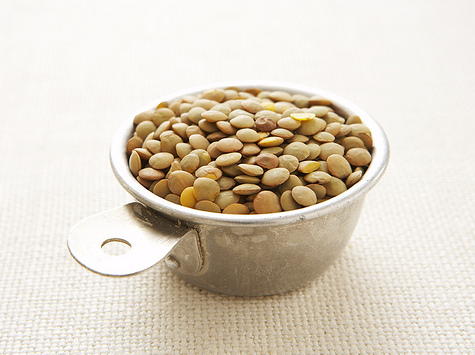 In many of the fruit-growing areas of Mexico, fruit is used as an ingredient in some of the main meat dishes: pears and peaches in Vitualla from the Bajio, pineapple and plantain in the manchamanteles of Oaxaca, peaches, pears, and apples in the stuffing for chiles en nogada of Puebla. Much of the same fruits are used in the caldo loco (literally, mad broth) of the San Luis Potosi highlands. These sweet/sour, salty flavors are reminiscent of those from Moorish Spain. (However, it is interesting that in other country areas the people, at least in eastern Micboacan, will not tolerate the idea, let alone eat such a mixture.) This recipe is a very popular way of preparing lentils in the capital and neighboring Puebla, where it would be eaten (because of the meat it contains) as a main dish. Normally a dish of lentils without meat would be served after the main course, instead of frijoles de olla. Lentils in Mexico are very small and greenish-brown in color; however, any other type of lentils could be used. There is, in fact, a quite indigestible version of this dish given in the Diccionario de Cocina, preceded by a warning: “This vegetable is best eaten only by those with strong stomachs.” If they are well cooked, this advice can be ignored. It makes a delicious soup/stew for cold days, best eaten with crusty French bread and some good, strong red wine.

NotesMethod: Heat a carnal (griddle) over medium heat-c-it must not be too hot, or the chiles will burn and make the sauce bitter-and press the chile, inside down, on the carnal as flat as possible. Leave for about 3 seconds, turn over, and repeat on the second side or until the inside flesh turns an opaque, tobacco brown-s-about 3 seconds (if the chile is fairly moist, it will blister, but that is not the sign). Remove, cover with hot water, and leave to soak for about 15 minutes.

Asado (broiled, grilled, or charred on a comal): This method is used for many rustic table sauces that are uncooked, as well as for some of the cooked tomato sauces. The tomatoes are placed whole on an ungreased comal and cooked over medium heat until the skin is deep brown with charred patches and the flesh mushy. Some cooks skin them, but it adds to the flavor and texture if the skin is left on.

Tomatoes prepared in this way give the sauces a very special depth of flavor and sweetness. It is also a good method to use when tomatoes are in season and you want to store them for sauces during the winter. Choose the ripest and broil them in the following way: Line a shallow pan into which the whole tomatoes will just fit (not too large, or the juice will dry up) and broil 2 inches (5 cm) from the heat, turning them from time to time until the skin is blistered and browned and the flesh inside mushy. Store whole in the freezer in 1-pound (450 g) batches with all the juice drained from the pan.

Lentils with Chiles, Pork, and Fruit