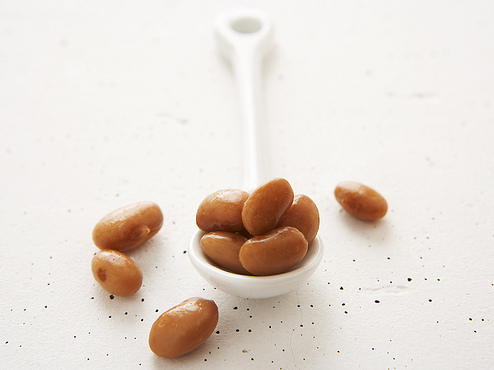 As the name implies, these beans are rich and certainly to be enjoyed with all the traditional ingredients, but also certainly to be eaten in small quantities. These frijoles are usually prepared for a fiesta to accompany barbecued meats, or carnitas, but they sit very well on a buffet table at any time, brunch included. This recipe was given to me by Senora Guadalupe Mendoza, who came originally to Patzcuaro from Queretaro to marry into one of the old families there, who are so proud of their Spanish heritage. For this recipe she uses a flattish, pinky-bay-colored bean called Ihuatzio for the lakeside village near where it is grown. California pink or pinto makes a good substitute. The beans should be cooked until they are quite soft and the broth is reduced to a thickish consistency.

Puffy, crackly pork skins, called chicharròn in Mexico, are without doubt the most popular of botanas (snacks), but making them requires patience and know-how.

Every butcher who kills his own pigs or has them killed at the slaughterhouse will have a pile of undulating, golden sheets on his counter a day or so after the killing, and you will be offered a sampling as you pass, no matter how early in the morning. As soon as the pig is killed and the bristles and hairs are shaved off, it is skinned. The fat is shaved off closely at both ends, and any remaining fat in the saddle and stomach area is scored-in crisscross fashion. It is then hung in any airy place to dry overnight. The next day the skins are piled into vats of boiling lard, and the long, slow cooking process takes place-2 hours, say, for a small, tender pig and 312 to 4 hours for a big, tough one. No seasoning is added to the boiling lard. Once cooked, the skins are drained on metal screens. When cool, they are once again plunged into much hotter lard, and in moments they will have puffed up into millions of crisp little cells. Drained again, they are then ready to eat.

You can choose whether you want thin, fatless chicharròn from the shoulder or buttock area or the fattier middle part, the stomach and sides, while the saddle tends to have a little meat still attached. It depends on your tastes when eating them as a snack or what the recipe calls for: en escabeche-thin; en salsa verde-fattier; etc.

The quality of chicharròn available in the United States varies tremendously: occasionally a butcher in a Mexican market or supermarket will prepare his own with varying degrees of prowess, while some of the packaged brands can be stale and tough ... and expensive to boot.


Apart from the following recipes, chicharròn can be ground to rough crumbs and added to masa for gorditas, or stuffed into gorditas with a chile sauce, or added to the ground meat for meatballs to make them rich and spongy, cooked with Pot Beans, or used as a topping for a pozole in Guerrero. 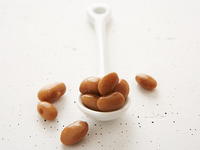