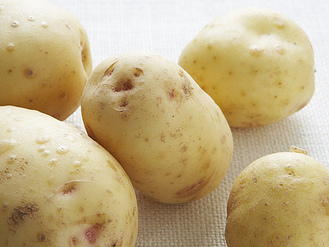 Knishes as we know them today were probably created in New York City, modeled after an unknown European prototype. According to Eve Jochnowitz, a culinary ethnographer, in a piece by Erica Marcus of Long Island’s Newsday, the knish probably had its origins in Western Europe and it accompanied the Jews eastward when, in the fourteenth century, they were expelled from France. This dating, says Jochnowitz, explains why early European references to knishes have them stuffed with meat or cabbage: The potato didn’t make its way from the New World to Europe until after Columbus’s journey in the late fifteenth century. Whatever their origin the word itself is related to the Italian word gnocchi, the Austrian word knoedle, and the Yiddish word knaidlach, all of which are kinds of dumplings. (Some sketchy etymological research on this produced the word “lump” as the meaning of the “gn” and “kn” root.) The New York City knish is a kind of dumpling, too—a baked dumpling, much as people call apples baked in pastry apple dumplings. It is stuffed pastry. The traditional New York City fillings are potato and kasha (buckwheat groats), although the old-timers of my youth also liked dusty dry liver knishes. That palate and that taste are gone, and today we have flavors like spinach and broccoli, usually blended with the potato. I’m told the popularity of broccoli is about to exceed pure potato. Sweetened cheese knishes have been around for decades—Yonah Schimmel started making them in his bakery on Houston Street. But, as Erica Marcus remarks, at least there are no sun-dried tomato knishes—yet. In the classic knish, the pastry encloses only the bottom and sides of the filling, leaving the top of the filling exposed. But there are various styles, including a strudel style in which the filling is made into a pastry-wrapped roll, then sliced. The first knishes were baked, as most delicatessen knishes are today. Schimmel, a Romanian immigrant, began selling knishes from a pushcart in 1890, just as Eastern European foods were being introduced into the previously German-style Jewish delicatessen. In 1910, he opened the bakery (he called it a knishery) where it stands today, on Houston Street, near the corner of Chrystie Street. Schimmel’s knishes have had their ups and downs over the years. When I was a boy in the 1950s, it was a regular pit stop for my father and me on our Sunday morning food adventures, but we stopped as much for the glasses of cold borscht and “sour milk,” a kefir-like drink, as for the knishes, which were not as good as those we could buy at our local Brooklyn delicatessen. Today, the knishes are back to delicious form thanks to the current proprietor, Alex Volfman. In 1921, Elia and Bella Gabay created a different kind of knish, a square knish totally enclosed by a heavier, thicker casing and deep fried. The company, Gabila & Sons Knishes, which is still going strong, now produces more than one and a half million knishes a year, and says it is “The Original Coney Island Square Knish.” The operative word in the claim, however, is “square.” Many other knishes were sold on the beach, and Gabila & Sons’ were not the first. Knishes for some strange and unknown reason became popular on the Atlantic Ocean beaches and boardwalks of Brooklyn early in the twentieth century. Not just in Coney Island, but in Brighton Beach, which is the residential and beach area next to Coney Island, and all the way out to the boardwalk of Long Beach, which is in Nassau County on Long Island. How a hot item like a knish was deemed appropriate food for stifling New York City summer days is one of the mysteries of the universe. Could it be its manageable size, and that it is self-contained? They were enormously popular, one of the enticing features of going to the beach. Knish stands, often selling hot dogs as well, lined the boardwalks. And hawkers even walked the sand to sell them to the beach-blanket crowd. The last of the Brighton Beach knisheries, Mrs. Stahl’s, opened in 1935 and closed in 2003, although the knishes are still made and sold wholesale. Les Green, the current owner, explained that the Russian community of today’s Brighton Beach (often called Little Odessa) doesn’t eat knishes. Most of his customers were coming from far away to stock up. So he sells them now to delicatessens, restaurants, and take-out shops in the suburban diaspora. That Gabila & Sons knishes were made to withstand reheating—and that knishes go so well with a hot dog—does, however, explain how potato knishes came to be one of New York City’s most popular street foods, split and spread with mustard or not. Knish carts were common on the streets of Manhattan before World War II, and after the war Gabila & Sons knishes were sold from the same carts as Sabrett’s hot dogs. For supposed health reasons, Mayor Rudolph Giuliani’s administration banned them from the hot dog carts in the mid 1990s, leaving hot dogs bereft of their traditional starch accompaniment, and New Yorkers just plain bereft. We never lost a New Yorker, or even, more importantly, a tourist, to a knish. But go fight City Hall.

NotesIt doesn’t pay to make just a few knishes. This is a party amount. If you want to freeze them, add ½ cup instant mashed potatoes to the real mashed potatoes. It will stabilize the filling and prevent it from becoming too wet when defrosted. The directions here are for making knish rolls that can be cut into individual finger-food servings after they are baked. These will have open sides, like pieces of strudel. To make a small knish with closed sides, use a plastic bench scraper to pinch the dough together at 1½-inch intervals. Press straight down as if you were trying to cut the dough, but do not use a sawing motion. Just press. Even if the dough does not pinch to a seal, it will be more enclosed when you cut the roll after it is baked.

To form classic, open-topped knishes, make the rolls as instructed here, and cut into 2-inch pieces. Take the piece of dough that is overlapping on the side and twist it so that it covers one of the open ends of the slice. Dab the end with a bit of egg wash, and bring it back up to meet the side of dough. Push the knish into shape, and bake as directed. 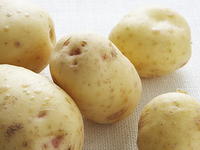 Sorry, but an onion pletzel is not a kinish. Yes, it was a flat but it was a bread with a dough similar to a biali. The onions were scattered over the top, resulting in a look that was similar to focaccia. Pletzels were sold at bagel bakeries but not usually as a daily item. Hope this helps.

Does anyone remember a knish that was flat and might have been called an onion pletzel made by Mrs. Stahl? For me that would be the ultimate soul food. Hope someone would have the recipe. Fifi