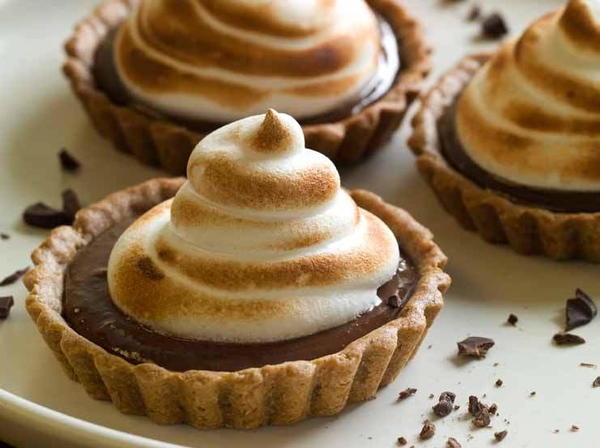 This image courtesy of Holly Stewart

This crust works well for custard-based pies. It’s easy to make and tastes wonderfully rich. Graham crackers are naturally low in fat, so I prefer to use the full-fat ones rather than the reduced-fat graham crackers, which have an artificial taste.

Generously coat a pie or tart pan with pan spray. Crumble the graham crackers into a food processor and process until they are reduced to very fine crumbs. Add the brown sugar, flour, and salt and process for 30 seconds. In a small saucepan, or in the microwave, melt the butter and shortening. Pour it over the graham cracker mixture, start the food processor running, and drizzle in 3 tablespoons water through the feed tube, mixing until the mixture clumps up around the blade. The dough should easily hold together when you pinch off a clump. If it does not, add 2 to 3 teaspoons more water, pulse to combine, and try pinching it again. Roll the dough between sheets of plastic film to form a round that is 1?8 inch thick and approximately 13 inches in diameter. Remove the top film and invert the dough, centering it over the prepared pan. Gently press the dough into the pan, using the top film as an aid. Peel off the film and continue to press the crust to cover the bottom and sides of the pan. Trim away any excess dough from the edges. If the crust cracks or tears, use scraps of dough to repair it, pressing to seal the cracks. Freeze the crust for 20 minutes, or until it is firm to the touch but not frozen through. Meanwhile, preheat the oven to 350°F with a rack in the center position. Prick the bottom of the crust all over with a fork. Bake for 25 to 30 minutes, until the edges are golden brown and the bottom is cooked through and no longer appears shiny. Let the crust cool in the pan for at least 2 hours.


To Form Individual Tarts: Use a round cutter or a sharp knife to cut the dough into six 4½ -inch rounds. (You will need to gather and reroll the scraps to make the final 2 rounds.) Peel the rounds from the film and press them evenly into the pans. The baking time will be about the same.