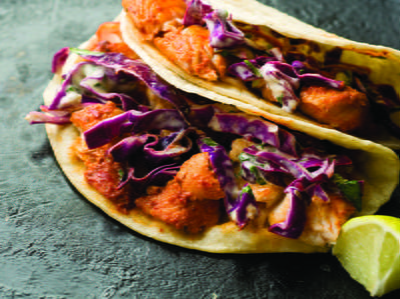 Fish tacos weren't always a popular Texan dish. Like all tacos, they were originally found in Mexico, primarily in the Baja area on the West Coast, though you could also find versions in the Yucatan as well. A man named Rick Rubio is said to have brought them to the United States by way of San Diego, California, bock in the 1980s. Soon, however, you started seeing them on menus in coastal Texas towns such as Corpus Christi and Houston. I had my first fish taco at Berryhill in Houston, a restaurant that has been credited with making fish tacos popular in Texas. Their version is the Baja interpretation, which means it's battered and fried. I, however, prefer the marinated version, which is more commonly found in South Texas. I find that this type of fish taco not only has more flavor, but is a bit healthier as well, since it isn't fried. I take mild tilapia and soak it in a tangy, bright guajillo chile paste and then quickly cook it in a skillet. For a bit of crunch, I pair the fish with a creamy cabbage slaw that's given a bit of heat with a serrano chile. Served with warm tortillas, Cotija, and lime, these tacos make for a satisfying meal.

Easy and tasty. I made half for dinner and the other half for lunch the next day. Boyfriend has requested that this be a regular

We really enjoyed this dish. I marinated the fish for about 6h. I fried it on oil not butter and a good nonstick skillet is a must if using tilapia.