Land of Plenty: A Treasury of Authentic Sichuan Cooking 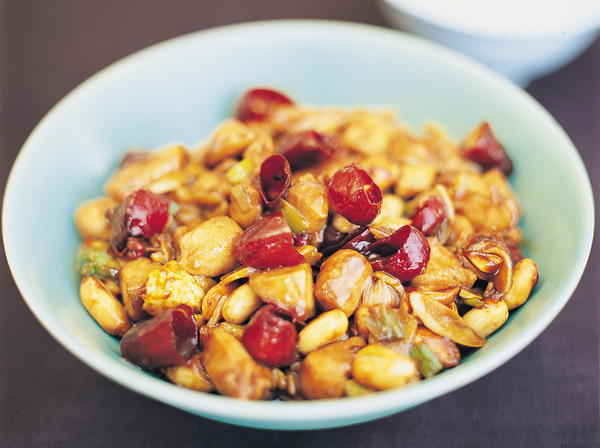 This image courtesy of Tara Fisher

This dish, also known as Kung Pao chicken, has the curious distinction of having been labeled as politically incorrect during the Cultural Revolution. It is named after a late Qing Dynasty (late nineteenth century) governor of Sichuan, Ding Baozhen, who is said to have particularly enjoyed eating it – gong bao was his official title. No one can quite agree on the details of its origins: some say it was a dish Ding Baozhen brought with him from his home province of Guizhou; others that he ate it in a modest restaurant when he went out in humble dress to observe the real lives of his subjects; still others, rather implausibly, that his chef invented the finely chopped chicken dish because Dian Baozhen had bad teeth. Whatever the truth of its origins, its association with an imperial beaurocrat was enough to provoke the wrath of the Cultural Revolution radicals, and it was renamed “fast-fried chicken cubes” (bong bao ji ding) or “chicken cubes with seared chiles” (hu la ji ding) until its political rehabilitation in the 1980s. Gong Bao chicken is beautiful to look at: a glorious medley of chicken flesh, golden peanuts and bright red chiles. The sauce is based on a light sweet-and-sour, peppered up with a deep chile spiciness and a trace of Sichuan pepper that will make your lips tingle pleasantly. The ingredients are all cut in harmony, the chicken in small cubes and the scallion in short pieces to complement the peanuts. The chicken should be just cooked and wonderfully succulent; the nuts are added at the very last minute so they keep their crispness.

Serves2 as a main dish with a simple stir-fried vegetable and rice, 4 as part of a Chinese meal with three other dishes