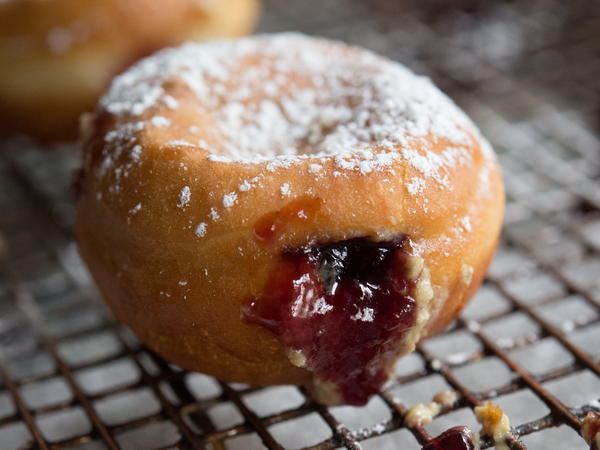 If I'm to be remembered for anything past my expiration, I think the foie gras doughnut might be my greatest accomplishment. It all started when I was seeing a girl who worked in the pastry department of a restaurant. We would have little tiffs about food and cooking. One of these was over which bread is "the king of breads." She argued for brioche, while I said fry breads. She temporarily won, citing that brioche accompanies the king of meats, foie gras. I swore that if I ever figured out how to make doughnuts, I'd put foie gras in a doughnut and serve it, proving once and for all that fry breads are the king of breads. Some time and some girlfriends later, I opened Do or Dine. At that time, there was one person on the floor and two people in the kitchen. I was running food as I cooked it. I ran out to a silver-haired man and his beautiful wife and daughter, put the food down, my apron a mess, and explained the dish. In a Jean Reno accent, he asked me what my plans were for zis kitchen. I said I wanted to do a lot of things, but mostly I wanted to get the recently opened doughnut shop up the street (called Dough) to make me blank doughnuts that I could fill with foie gras. The man asked me what I would do wif zis. I said I'd sell them. He said, "Well, I am Dough." I couldn't believe how happily the fates smiled on me. I shook his hand, took his number, and before I could call, he was bringing me samples of hole-less doughnuts to fill. The problem was, I had never cooked with foie, only eaten it, so I didn't have any idea where to begin. I went to a specialty store and purchased some foie gras mousse. I ran back to the restaurant to pipe it into the blank doughnuts. I knew it needed a fruity jam to balance the richness and savoriness, but because I was impatient, I sent someone to get it for me. They came back with Welch's grape jelly, which I piped in right away, planning on substituting a fancy jam down the road. I salted the top of the doughnut, then hid the salt in confectioners' sugar. It looked like a normal jelly doughnut. I bit into it. The rich foie was put into overdrive by the sweetness, but tempered by the slight tang of the Concord grape jelly. The dough was light and fluffy. It was a four-star dish disguised as a jelly doughnut. I finally won the fight, at least in my own mind. Some people came to take the doughnut's picture. Then some people claimed they invented the foie gras doughnut first. Then some people protested online. But it wasn't just some people, it was hundreds. Somehow we got an e-mail every time someone signed the petition, so we were missing e-mails from suppliers and employees with our inboxes flooded. I set up a filter to collect the protest e-mails. Eventually we had well over a thousand e-mails. I took a screen shot and sent it to the press. A war began. Everyone wanted to know why thousands of people were up in arms over a little doughnut. We made international news, and the little joint, cobbled together by and for friends in Bed-Stuy, cemented its tiny place in New York City dining history. Here you can make your own controversy, homemade, or you can just go buy the components and assemble them like I do at the restaurant. 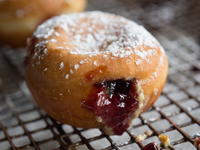