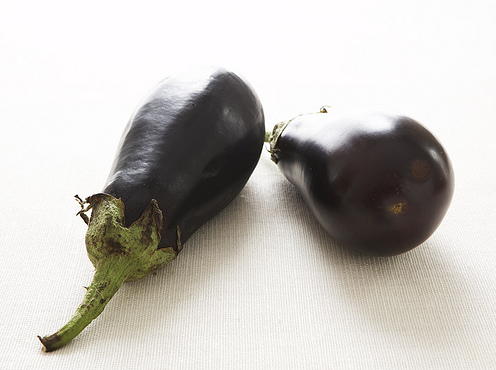 People who try this dish always want to know what kind of noodles they’re eating. They are fresh Chinese noodles, the best bargain around. Although fresh Italian pasta is quite expensive, fresh Chinese noodles are usually under a dollar a pound. In this dish they form a crunchy crust over eggplant and peanuts in a Vietnamese-inspired sauce of ginger, sherry, vinegar, and onions.

RICE VERMICELLI, OR RICE STICKS. These very thin noodles are sold dry, often divided into skeins, in dear plastic packages in Asian markets and many supermarkets.

To cook: Soak the noodles in warm water until soft, about 30 minutes, before adding to soups, stir-fried dishes, and sauces. To serve cold or in rice-paper rolls, boil for 1 minute, then rinse well. They can also be deep-fried; drop them into hot oil, and they will immediately puff up. Drain the fried noodles, and use them in salads and stir-fried dishes.

DRIED RICE NOODLES (THE WIDER ONES). These noodles, used in pad Thai and other pan-fried dishes, vary in width from 1/16 to 1/3 inch. They are sold in Asian markets. To cook: Pour a lot of very hot water over the noodles, and let them stand until soft (about 30 minutes). Strain the noodles, and lightly coat them with oil. Add them to a pan-fried dish such as pad Thai, to soup, or to stew.

BEAN THREAD OR CELLOPHANE (“TRANSPARENT”) NOODLES. Made from mung-bean starch, these thin, dry noodles are sold in Asian markets and some supermarkets. To cook: Soak the noodles in warm water until they are soft, about 15 minutes, then add them to soup or a stir-fried dish.

FRESH RICE NOODLES (SHA HE FEN OR HU TIEU). These are sold in folded sheets in larger Asian markets. When cooked, the noodles have a wonderful slippery, satiny texture.

To cook: The sheets are cut into thin strips and stir-fried, or cut into wide strips, rolled around a filling, and steamed or pan-fried. Best used the day they are purchased, but will keep for up 5 days in the refrigerator. After refrigeration, they need to be resoftened: Drop them, into boiling water, and boil for about 2 minutes.

FRESH CHINESE WHEAT NOODLES, OR MEIN. Typically sold in 1-pound packages, these noodles vary in width. They are sold in most supermarkets as well as Asian markets. To cook: Boil these in plenty of unsalted water until they are tender, about 4 to 6 minutes. Rinse the cooked noodles before, adding them to a pan-fried dish or soup.

DRIED CHINESE WHEAT NOODLES. These are sold in swirled nests and straight lengths.

To cook: Ignore any directions on the package. Boil the noodles in unsalted water until they are tender; the time will vary depending on the width of the noodles. Use the noodles as you would fresh wheat noodles: pan-fried, in soups, or in stews.

To cook: Typically served in broth, udon noodles are first boiled in water until tender.

DRIED SOBA. These Japanese buckwheat noodles may also contain wheat flour. They are traditionally served with dashi (a stock of bonito and kelp). Sold in Asian markets and whole foods stores, they are rather expensive. Udon noodles can be substituted.

To cook: Boil soba noodles in water until they are tender. Serve them cold or pan-fried.