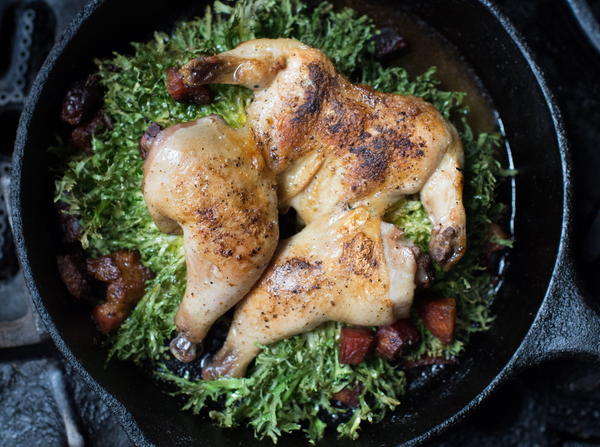 Not many cooks can claim Alton Brown as their mentor. As a matter of fact, I think I'm the only one, and that feels pretty darn good to type. Alton has an encyclopedic knowledge of food and cooking. He can call an Iron Chef battle as though it were football. He's creative--he's made multitiered wing steamers, dehydrators from box fans, and condiment caddies from egg cartons. Here, his favorite weeknight protein, the Cornish hen, is amalgamated with one of my favorite salads, frisée aux lardons, to make a skillet-dish for two, which I would be proud to share with him and I believe Alton might like to eat. The Cornish hen serves as a vessel for the cured salty bacon and its fat, with its richness cut by fruity apple cider vinegar and the crunch of frisée.

Boning vs. fillet knives: A :A boning knife is a knife that is skinnier than your average kitchen knife, designed to get into the crevices between flesh and bones. The best boning knives also have a thicker side at the hilt, used for cutting through bones. I have a boning knife for chickens and anything larger. For smaller creatures, I use a fillet knife, which is thinner than a boning knife, and is generally flexible to some extent.