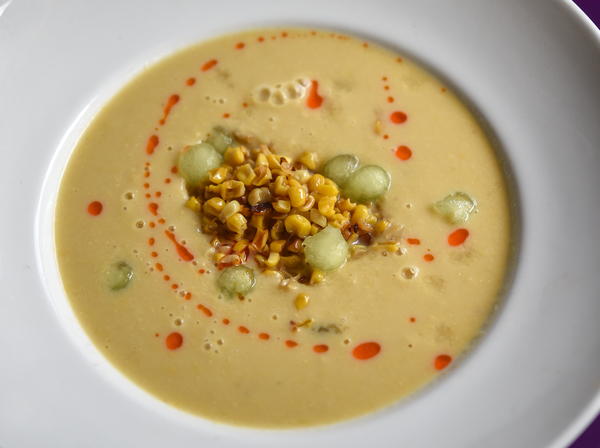 By borrowing a little from the law of guac, I use coconut milk to give this summertime soup a creaminess and richness. The heat of the chipotle oil plays footsie with the sweet sweet corn, and then, just in case the heat gets intense, little pearls of honeydew work as a fire extinguisher. That chipotle oil is just a basic flavored/colored oil. You can use the process described in the recipe to infuse almost any flavor into an oil (see Notes). This soup also gets a lot of its favor from the bones of the corn, the cobs. I have served kids this same soup, but without the chile oil or honeydew, garnished with Cracker Jacks. Try it, they LOVE IT.

NotesA chinois is good for straining large quantities of food from one vessel to the other, but you have to use a spatula or spoon to scrape and push the food through. A towel allows you to squeeze food through, and provides better filtration than a chinois and cheesecloth, but you risk ruining a towel and, if the food is hot, you could be burned. Cheesecloth, in my opinion, is only really good for making a custom-sized pouch of things that you want to submerge in a liquid (a sachet). The nutmilk bag filters as much as a towel and can be used as a sachet, but it isn't very large and can't be scraped, meaning you could burn your hands if the food is hot. A coffee filter has the most filtration, but is the smallest and can't be squeezed, meaning gravity will take its time. The bottom line is this: If you have both a nutmilk bag and a chinois, you don't need the rest.