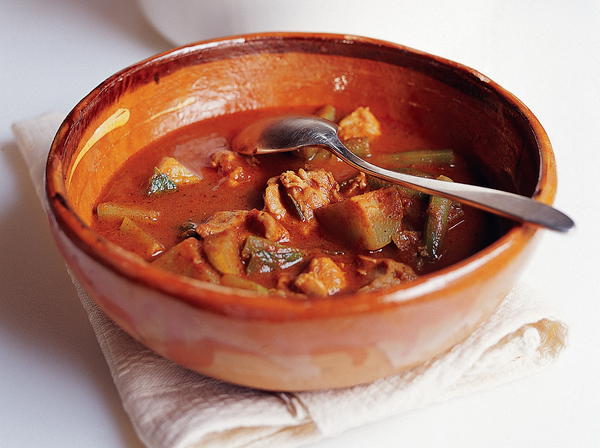 This image courtesy of Christopher Hirsheimer

Don’t let the word mole scare you away from this recipe – moles being the famous, time-consuming, special-occasion dishes that Mexican make from a huge grocery list of ingredients. Typically, that’s what they are. But this mole – one of the classic seven moles of Oaxaca – is an everyday mole, put together in a matter of minutes rather than hours or days. It offers a satisfying spice-and-herb-tinged yellow-orange sauce (actually, it’s more like thick broth) buoying pieces of tender chicken and fresh vegetables. Because the dried chile plays a lesser role in yellow mole than it does in, say, the famous mole poblano, I have found it possible to skip its toasting and soaking, saving twenty or thirty minutes. Plus, the traditional thickening of this mole with corn tortilla dough (I use the dehydrated power masa harina in this version) offers a mellowness that rounds out an brought edges the chile may have. About the hoja santa: No one in Oaxaca would think that a pot of yellow mole was complete without a handful of torn hoja santa leaves added just before serving, but then most cooks have an hoja santa bush near the kitchen window. Though it’s very easy to grow in moderate climates (during the winter in Chicago, I bring mine inside), many of us can’t easily lay our hands on this sarsaparilla-flavored herb. So I say, use cilantro. It’s not the same as hoja santa, but it’s good.

Because I have such respect for kitchen tradition (and because of the fact that I’ve already taking a few liberties here with this recreated classic), I’m hesitant to go much further. I will say, however, that a seafood version of yellow mole is one of my favorite things in the world. When the vegetables have cooked for 10 minutes, in place of the chicken add a dozen or so scrubbed clams or (debearded) mussels and about 12 ounces firm-fleshed fish fillets (like halibut, bass or grouper) cut into about ¾-inch pieces. In Oaxaca, they also make a much thicker version of this sauce (they would add the equivalent of about 6 tablespoons of masa harina versus the 2 I’ve called for here) to use as a filling for what they call empanadas: They press out a corn tortilla from the prepared corn masa and lay it on a griddle to brown lightly, then flip it and top it with a spoonful of the thick sauce, a few shreds of cooked chicken and a big piece of hoja santa leaf. After folding it in half, they cook the empanada on the griddle until toasty and aromatic.

Made exactly according to the recipe and it was awesome (just used cilantro in place of hoja santo)! My husband and I gobbled the whole thing up between last night and today. It is warming but not too spicy, flavorful and hearty while still being very healthy! Normally I don't even like green beans, but they are great here. It might be my favorite recipe I've tried so far from Rick Bayless's Mexican Everyday cookbook (although my husband still says his favorite is the Chicken ala Veracruzana...). I was worried after my Red Chileato soup from Mexican Everyday turned out waaaaay too spicy, but this was really a great dish that could become a huge favorite. I would like to try it with tofu next. I think chicken breast also would work great.

I used a New Mexico Chile instead of the Guajillo. And I found the dish to be pretty... and rather bland. Of course that might be because I live in a house where as "Mexican" as dishes get would be tacos. I am, however, very interested in further cooking with Hoja Santa, but disagree with Mr Bayless's assertion that every cook happens to have a plant when they don't grow any further North than Mexico. However, a local Mexican bodega happened to carry them. Though, the cashier questioned me as to how I planned to use them.

I made this last night and it was delicious! Made almost exactly as written, but with chicken breasts instead of thighs. It was so good that my husband and I ate the whole thing. Also seems pretty healthy. I will definitely make it again.