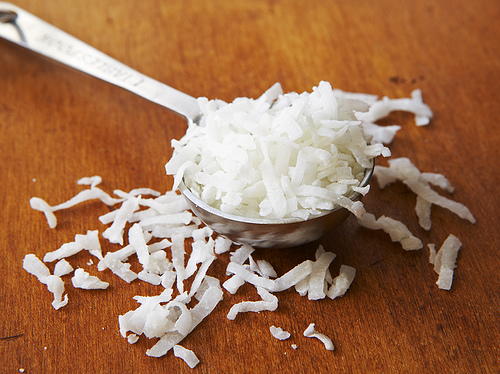 Pichi-pichi, made from grated cassava, sugar, and pandan water, are something like large, soft gumdrops with a clean, floral flavor. Pichi-pichi are typically enjoyed in one of two ways: right out of the steamer, while still warm and soft, or at room temperature, when they’re firm on the outside but still quite soft on the inside. No matter their temperature, they’re commonly topped or coated with a generous amount of freshly grated coconut.

NotesCassava: This yamlike root, also known as yuca or manioc, has a barklike skin (often coated in wax for market) and milky white flesh. It is a staple in African, South American, Philippine, and Caribbean cooking. Like the potato, cassava can be grated raw and cooked into dense, chewy dumplings, or it can be cooked, mashed, and made into softer, more cakelike dumplings.

Choosing your cassava. There are two main types of cassava (bitter and sweet), but only the sweet variety is sold whole in the United States. We use sweet cassava in all of our recipes and it is available at caribbean or Asian food markets and in the produce section of some supermarkets. Peeled and frozen cassava can also be found at some supermarkets and can be used as a component in soups and stews, but we don’t recommend using frozen cassava as a substitute for fresh cassava in dumpling dough or batter recipes. Bitter cassava is toxic when raw and is often made into flour or coarse meal, using a careful process that takes days, in which the root is soaked to leach out the toxins and then sun-dried and ground. It is generally not available in the United States.

Preparing the cassava: Since the cassava’s skin is so thick and woody, you will need to peel it with a knife. Be sure you remove not only the waxy brown bark but also a barely distinguishable “second skin” that lies between the skin and the flesh of the cassava. This second skin is fine to eat, but it cooks up into an unappetizing shade of gray. After the cassava is peeled, quarter the flesh lengthwise and pull or cut out any tough or more fibrous strands from its center.

Coconut: Coconut milk and grated coconut are used regularly in many Indian and Southeast Asian dumpling recipes. Grating your own coconut and making fresh coconut milk takes some time, but the results are stunning. Whole coconuts are available at different degrees of maturity. Young coconuts are valued for their soft, silky flesh and tantalizing light “coconut water,” while mature coconuts offer up a firm, thick flesh with a much more concentrated flavor. Brown and hairy mature coconuts are the ones used for shredding and squeezing coconut milk. It’s important to buy coconuts from stores that sell them often. Coconuts that sit around can turn moldy on the inside. Shake the coconut and listen for a faint sloshing sound. If the liquid sloshes conspicuously, or not at all, that may be a sign of a coconut that is just too old. We learned to buy two coconuts for everyone called for in a recipe, in case one was a dud.

Cracking the coconut: There are many ways to crack open a coconut, and none of them is very elegant. This quick method works best for us: Wrap one coconut in three or four layers of paper towels (you could also use a kitchen towel and rinse it out afterward) and place inside a sturdy plastic shopping bag or a comparable sack (double up on the bags if needed). Find a good hard surface to whack the coconut against, indoors or outdoors. Grip the bag a few inches above the coconut and slap it as hard as you can against the surface. Do this a few times, even after you hear it crack open, so you can loosen the meat and break the coconut apart into a few manageable pieces. Unwrap the pieces and rinse them off in a bowl of cool water.

Removing the flesh: Fold up a kitchen towel and use it to hold a shard of coconut in one hand. Slide a sturdy and-we cannot emphasize this enough-blunt knife in between the shell and the flesh as far as you can while still being able to twist the knife. This twisting motion should pop the coconut meat out. Some coconuts will be easier to work with than others. Take your time and use extra care in handling the sharp edges of the coconut shell. Once all the meat has been removed, peel off the brown skin with a vegetable peeler. Rinse off the peeled pieces in a bowl of cool water. If you are not using them immediately, peeled pieces of coconut can be kept in a bowl covered with a damp towel for up to 2 days in the refrigerator.

Grating the coconut: Grate the coconut pieces over a board or a cloth through the large or medium holes of a box grater. Measure out enough coconut for your recipe and keep the rest tightly packed and refrigerated for up to 2 days or frozen for up to a month. If making dried, grated coconut, spread the coconut out on a large sheet tray and bake in a 200°F oven for 15 to 20 minutes. One large coconut should make 4 cups of freshly grated coconut or, after baking, 2 cups of dried coconut.

Dipping Bowls: Small dipping or condiment bowls are used when steaming certain dumplings that are typically small, fiat, and round. Sometimes they are the mold of choice, as with the Khanom Thuay (April), while at other times they substitute for special molds that may be impractical to buy for a single recipe. These dipping bowls should be no more than 2 inches wide and about 1 inch deep. They can be found at many Asian markets that sell tableware or at department stores. 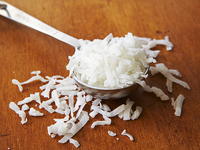