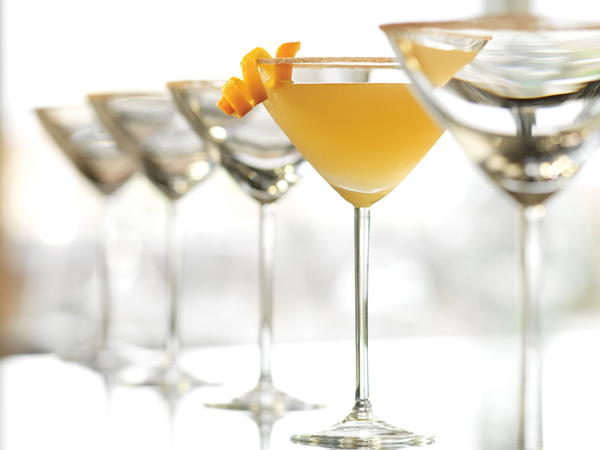 The Cable Car is a simple balance of Captain Morgan spiced rum, orange curaçao, and fresh lemon sour, served up in a cinnamon-sugar rimmed cocktail glass. Perhaps the best known of my original recipes, it was created in 1996 as a signature cocktail for Harry Denton’s Starlight Room, a nightclub and cocktail lounge atop the historic Sir Francis Drake Hotel in San Francisco. One of the city’s landmark properties, the Sir Francis Drake is located along the world famous Nob Hill cable car tracks. Its Starlight Room is affectionately referred to as the lounge that can be found “between the stars and the cable cars.”

Founded in 1983, Captain Morgan is the top-selling spiced rum in the world. Produced by the Serralles Distillery in Ponce, Puerto Rico, it’s lush with flavors of nutmeg, clove, cinnamon, and vanilla. A slightly bitter complement, orange curaçao works nicely with the spicy sweetness of the rum. Curaçao, a generic reference to orange liqueur, is so named for an island in the Dutch West Indies where some of the finest bitter oranges in the Caribbean are cultivated. The peels of these unique citrus fruits were brought to Holland in the seventeenth century, where the first orange liqueur was created. Today, this versatile liqueur is primarily produced in France, Holland, and the United States, and still features the aforementioned Caribbean peels. It has been some time since I left beautiful San Francisco, but this wonderful tipple lives on-rich, smooth, and delicately spicy.

Use only fresh lime juice in your drinks recipes. This is the most fragile of the citrus juices and should not be stored for later use. I also recommend you hand-extract the juice into a small container or pitcher and then measure out the desired amount. The juice of one small lime will yield approximately 1 oz (30 ml) of fresh juice.

Egg whites are the traditional emulsifier used in classic drinks including the Tom Collins, Whiskey Sour, or the American Cocktail (page 88). They are ideal for adding a creamy texture to a drink as well as a frothy appearance. If you’re uncomfortable using raw egg whites, use pasteurized egg whites available at the grocery store.

What’s a cocktail glass? Think Martini. Ever since the late 1980s arrival of the Martini craze, virtually anything served in a cocktail glass was referred to as a “Martini” of one kind or another, and since then, the glass has been known better by that name. In truth, there are countless versions of the cocktail glass. In my opinion, the classic rendering is a true work of art, but to each their own. I do think, though, a few rules should be followed when selecting a cocktail glass. First, it should be stemmed. Warm hands should never touch the cold bowl of a cocktail glass. Second, there is the question of size. For the record, a cocktail glass shouldn’t be more than 6 to 7 ounces (180-210 ml) in size. (With that in mind, the cocktail recipes in this book are formulated for serving in glasses of this size.) The original Martini would have been served in a glass of 3 or 4 ounces (90-210 ml) at most. In the words of Harry Craddock in his Savoy Cocktail Book, “A cocktail should be short, and snappy” and it “should be consumed quickly while it’s laughing at you!” I completely agree. No one needs to drink a 12-ounce (360 ml) Martini. Treat your cocktail glass with respect. Wash it properly, buff it with a linen towel, never handle it by the rim, and always chill before allowing it to greet your cocktail.

...flexibility and a genial attitude of experimentation are distinguishing marks of the expert beverage chemist. Recipes are as necessary as the traveler’s maps, but they are never immutable. To violate a favorite recipe wisely may be to produce a new and superior concoction.—“G. A. C.,” The Art of Mixing Drinks, 1938 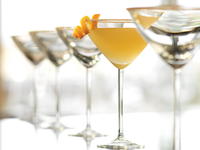