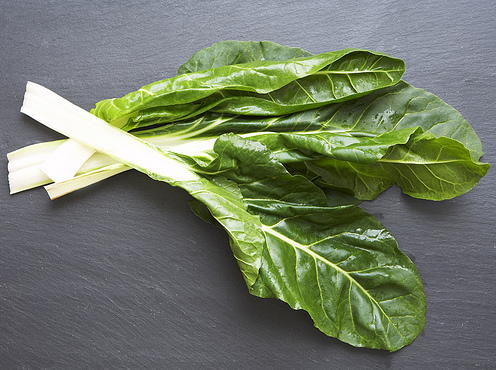 Here’s an easy, delicious side dish for just about any meat, fowl, or fish main course, or you can swirl it into a pot of cooked beans. Keep in mind that the chard cooks way down, so using two or even three bunches is not an unreasonable amount.

Swiss chard goes by many names, including leaf beet, silver beet, sea kale beet, and simply chard. The use of the term Swiss came about in Europe because of the need to distinguish chard from a similar French green. Chard can be traced back to the Hanging Gardens of Babylon, and Aristotle spoke of it in 350 B.C. The broad, fanlike, slightly crinkled leaves remind some chard partisans of beet greens and others of spinach, though chard is usually more bitter and pungent, and the stalks can taste slightly salty. Beets and chard are varieties of the same species, and reveal the same betaine pigment in the veins of their leaves and in their colored stems.

You can now buy Swiss chard with rainbow stalks in psychedelic yellow, orange, and pink, but most of the chard at the market has the more conventional white or red stalks. Regardless of the color, chard is good for you, with high concentrations of potassium and other minerals, and lots of vitamins A and C. It is thought to reduce risks of certain cancers and cataracts, too, and provides an excellent source of dietary fiber.

Stuart Dickson of Heirloom Organics, near Watsonville, is committed to genetic preservation. “Most heirlooms,” Dickson explains, “come from seeds that have been passed down from generation to generation and village to village for over a hundred years.” His chard is exceptional, he says, because he has “carefully chosen to plant the right variety, for the right soil, at the right time. I have figured out the best habitat for my heirlooms to flourish. Chard likes a rich, dark, loamy soil with good drainage. It’s a hearty plant that can be turned under with a tractor and revives itself in no time.”

Dickson learned his trade working on farms in England, Israel, and France, picking up sound sustainable farming practices along the way. They include, among other things, creating habitats for beneficial insects, careful water management, and the use of flames to singe weed seedlings.

For cooking, Dickson suggests separating the stalk from the chard leaves, as they cook at different rates. He cuts chard leaves into a chiffonade and swirls them into wintry soups and scatters them on top of baked pizzas. “Young, tender leaves have an affinity for eggs,” he says, so he folds them into omelets. He also tosses them with a vinaigrette as a salad green, much like spinach.

Available all year, but is best from early October to early April.

Check for moist, crisp, brilliant green leaves with crisp stems and no evidence of browning.

To revive slightly limp chard, stand the bunch upright, stalks down, in a jar of cold water for an hour. Then, dampen the leaves, wrap in a damp towel, and store in the vegetable bin for up to 4 days.

Swirl the leaves in a bowl of cold water to shake off any sand or dirt. Trim off any brown spots from the stems or leaves. Because they cook at different rates, separate the leaves from the stalks: fold each leaf in half lengthwise; then, holding the leaf, pull the stalk off or cut it away-with scissors or a knife. If the ribs or stalks are tough, peel them as you would celery, then cut them into small pieces.

To blanch chard before using in a baked dish, drop the stems, cut into 1-inch pieces, into boiling salted water and boil for 3 minutes. Add the cut leaves and continue to cook for another minute, or until tender, then drain promptly.