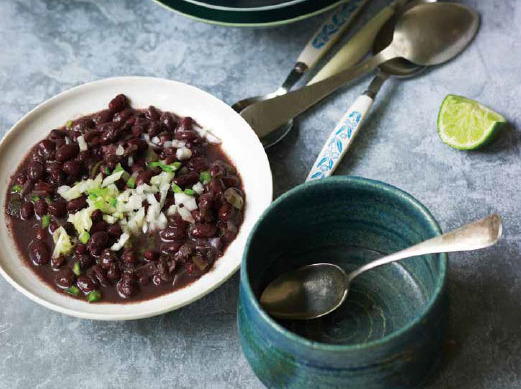 This image courtesy of Ellen Silverman

On weekends, my grandparents would spend the day preparing a large meal for us that would typically include frijoles negros though I never ate them. I’d know lunch was almost ready when I heard my grandfather frying the egg that would go on my white rice instead of the delicious beans on eyerybody else’s plate. My Abuelo Peláez was my favorite and I was his, so I loved the exception he made for me. It wasn’t until I visited family in Spain that I gave frijoles a chance when they were made in my honor with the understanding that Cubans could “not live without their Mack beans and rice.” Trying them out of politeness, I realized what a terrible mistake I’d made. By that time, my grandfather was well into his nineties and it had been a couple of years since he could manage hatches of frijoles negros. Fortunately, it was one the few recipes he’d written down. Using my family as Proustian proxies, I’ve spent many afternoons since trying to get his beans exactly the way others remember them, trying to make up for lost time.

NotesVariationsFor a thicker, meatier pottage, heat the oil to make the sofrito, then brown a ½ pound of Spanish-style chorizo, tocino, or slab bacon before adding the rest of the ingredients for the sofrito, Mash one cup of the simmered beans into the sofrito until well blended before adding the mixture back to the pot. Proceed with the recipe as directed.

Simmer the beans, green pepper, onion, crushed garlic, olive oil, and bay leaf until just tender, about I hour. Drain the beans and reserve 3 cups of the cooking water. Prepare the sofrito as directed. Combine the beans, cooking water, and sofrito in the pot and bring to a simmer over medium heat. Add 2 cups of extra-long white rice or converted rice. Return to a simmer then turn down to the lowest possible setting and cook covered until the liquid is absorbed and the rice is tender, 20 to 30 minutes. Remove from the heat and allow the rice and beans to rest, covered, 15 minutes before serving.

Soak and simmer the beans as directed. Add the sofrito and continue to simmer until thickened and remove from the heat before adding the final seasoning. Cool to room temperature and refrigerate, covered, overnight. The following day, warm the beans over low heat then add the vinegar, salt, black pepper, and sugar as directed.

If the beans get away from you either by overcooking or oversalting, add more water and return to a simmer over low heat.