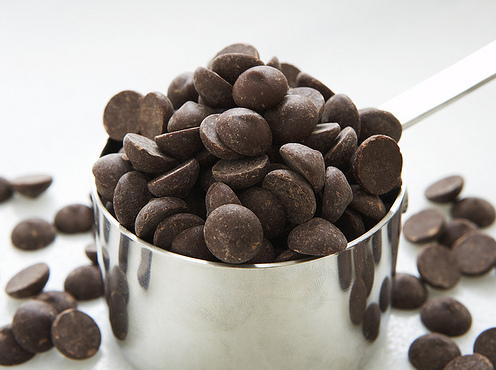 On February 3, 1994 (Season 5, Episode Number 77), Jerry Seinfeld, waiting on line in a New York City bakery, used Black and Whites as a metaphor for racial harmony and consequently made these cookie-cakes into a national sensation. Since then, everyone who comes to New York City needs to eat a Black and White. Meanwhile, native New Yorkers laugh to themselves. Black and Whites were never very good, and nowadays they’re worse. A few bakeries would bake a tender, vanilla-and-lemon-scented cake, as the one below, but most would bake a dry and tasteless cake. Now they are sold in corner grocery stores. Not a cookie, but sometimes called a cookie, Black and Whites are made with a stiff cake batter, baked into a mound, free-form on a cookie sheet. The curved top becomes the bottom. The flat bottom becomes the top and gets slicked, harlequin style—half with chocolate, half with vanilla fondant. No one seems to know who invented the Black and White, or where it was first created. George Greenstein, a second-generation Jewish baker who has devoted his retirement to translating the old New York neighborhood bakery recipes into contemporary home recipes (Secrets of a Jewish Baker), feels they must have been invented at the beginning of the twentieth century by a baker looking for yet another way to use his standard yellow cake. They were clever. They caught on. They got copied all over town.