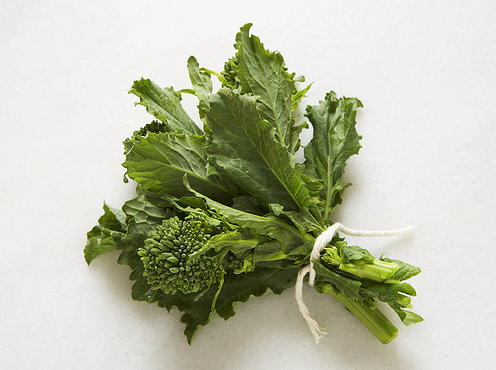 Cime di rape, sometimes called rapini, and most commonly called broccoli raab in America, is a member of the turnip family; despite that fact, it more closely resembles broccoli in appearance and in taste. The vegetable is interchangeable with broccoli in the classic orecchiette con sugo di rape (“little ears with rape sauce”), but rape has a uniquely bitter taste beloved by the Italians. Actually, the vegetable is more commonplace in the south of italy than in the north. It became part of my mother’s repertoire when she came to America, where she learned to cook it from my father’s mother, who had emigrated from Apulia. American cooks have a tendency to sauté this green without first boiling it because of the current aversion to boiling. This is a mistake, however, for boiling it briefly before sauteing rids it of excessive bitterness and tenderizes the stalks.

Check your spelling -"it's RABE"