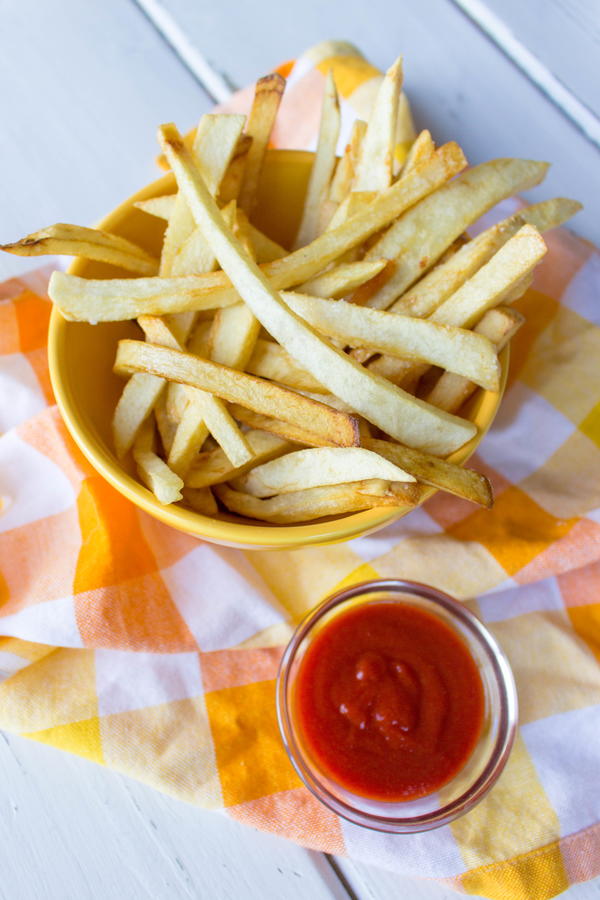 There were surely few lowlier, more stupid moments in American history than when a few boobish media whores started talking about changing the name of French fries to “Freedom Fries.” First of all, the French call them frites–and could hardly care less what we call them. (I’m sure that, if anything, they were amused at the mini-controversy, as it seemed to confirm their worst assumptions about the savage and “uncultured” Americans.) Second of all, frites are very likely a Belgian invention. Third, if you really want to hurt the French, just keep opening McDonald’s franchises and Euro Disneys. And, of course, continue making better movies and popular music than they do. They really hate that. Which is to say it’s never a good idea to mix politics and food. I’m no fan of Donald Rumsfeld, for instance; but if he makes a good sandwich, I’ll certainly eat it.

We’re famous for our fries at Les Halles. Many have said that we make the best fries in New York. Naturally I agree. Your fries, on the other hand, very likely suck. Most people don’t bother to make fries at home. There’s the oil disposal problem for one. After cooking one batch of fries for dinner, you’re stuck with a few quarts of heavy, messy, used oil that you can’t dump down the drain, can’t pour in the garbage, and can’t throw over the fence into Flanders’ yard. Unlike a restaurant, which can and will reuse the oil until it’s dead (and get money for selling the used oil to renderers), it’s not likely you’ll be regularly frying spuds at your place. As well, restaurants have large, professional deep fryers that are drained at the end of the night by a dishwasher or porter. There’s plenty of room to cook lots of fries in those things—and you don’t even have to clean up afterward. Chances are, the first time you made fries, you put too many potatoes in the oil at one time, and they became greasy, limp, and inadequately caramelized. Maybe you didn’t even bother to blanch them. In the end, no matter how hard you tried to suspend disbelief, you knew your fries just didn’t make it. Reasonably cheap deep fryers are available for home use. They cost around fifty dollars and are probably your best option for trying the following at home. You can regulate the temperature. Most make it easier to dispose of the oil. There’s plenty of room. And there’s all sorts of other fun you can have: making chips, spring rolls, croquettes, frizzled garnishes, batter-fried fish, and so on. Alternatively, you can fill a heavy-bottomed pot with a load of oil, crank up the flame, and use a thermometer to tell you when it’s at the right temperature. Later, presumably when it’s cool, you can pour the oil back in the containers it came in and dispose of it. There are a few very important factors in the making of a really good French fry: THE OIL. You need lots of it. You can’t make a decent fry in a skillet with a pathetic inch of oil in it. The fries won’t cook evenly. Peanut oil is what we use at Les Halles. And peanut oil is what you should use. In a perfect world, we’d love to render down some beef fat, or the kidney fat from veal, and fry in that. But these fats break down quickly and would be prohibitively expensive and difficult to work with in a busy restaurant situation: You’re chucking out your oil after one use anyway, though, right? So you might, after mastering the peanut oil version, try that out yourself. It makes a real difference.

THE POTATO. An Idaho potato, roughly peeled, is what we use. Specifically, we use what’s called a GPOD 70 potato—meaning it’s an Idaho potato of a certain size conducive to perfect fry-dom. It comes 70 to a case. BLANCHING. If you don’t blanch your fries first, you’ll get a scandalously bad result. Blanching is a must. FRYING. To the right doneness. Not too many at a time. The fries should float free in the hot oil, not be lumped together so they stick. DRAINING AND SEASONING. So, let’s make fries. But do it right. There’s no half-ass way to make a French fry. Respect and observe the tenets of fry-dom and you’ll be well on your way. 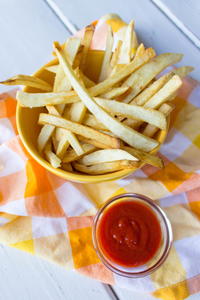 Excellent recipe -- I found the admonishment to blanch the fries really did make the difference between "Good" and "Exceptional". We use an inexpensive 6 Qt cast iron Dutch oven with a thermometer for frying, then cover the pot of oil (yes, after it's cooled) with its heavy lid and save for another day. If you're careful not to let the oil get hotter than 380, it can be reused 3 or 4 times in a month with little loss of quality.