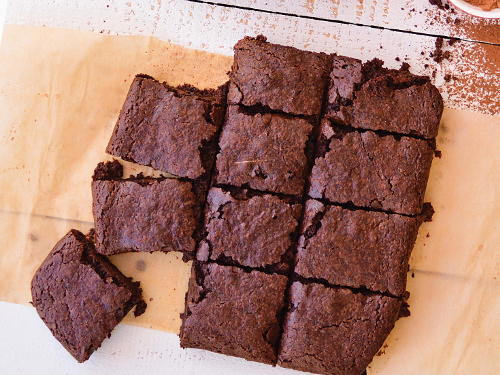 This image courtesy of Zsu Dever

Editor's Note: Are you looking for a decadent treat? Then this Chewy Fudge Brownies recipe is sure to satisfy! This vegan dessert recipe includes aquafaba, non-dairy milk, and other ingredients, resulting in these chewy fudge brownies the entire crowd will love. You can top these brownies with your favorite non-dairy vanilla yogurt or ice cream, or serve with an assortment of in-season fruit for a truly fresh taste. You can definitely serve this brownie recipe at your book club's next meeting, your neighborhood block party, or even for a night in with friends. Is this your first time using aquafaba in brownies? The recipe's chef has a tip on this recipe in the Notes section below.

Rich, chocolatey, and chewy on the inside and lightly crisp outside, these brownies are sure to satisfy any chocolate craving. Make sure to use Dutch-process cocoa powder and bake the brownies just until a test toothpick is still holding onto a few crumbs. The aquafaba acts as an emulsifier and light leavener in this decadent dessert.

Although aquafaba is best if homemade using the recipe provided in the book, you can use aquafaba from canned chickpeas. Use the organic, low-sodium, canned chickpeas and strain off the liquid into a measuring cup using a fine mesh strainer. Note the amount of liquid you acquired, then add it to a medium saucepan and bring to a boil. Reduce to a simmer and cook until the liquid reduces by 1/3. Cool the aquafaba completely before using. 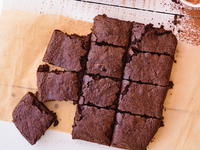