Home > Mexican Recipes > Classic Tortilla Soup with All the Trimmings

Classic Tortilla Soup with All the Trimmings 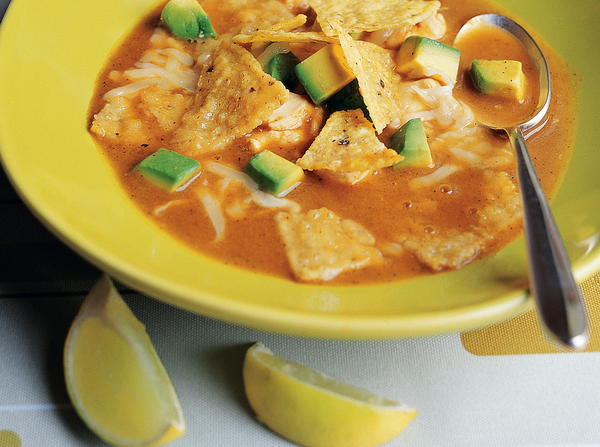 This image courtesy of Christopher Hirsheimer

Like guacamole, tortilla soup has a place, I feel, in practically ever collection of Mexican recipes. Especially everyday recipes. It’s a filling, flavorful meal that can be made with little effort, but one that sings with an unmistakable Mexican harmony: Earthy dark pasilla chile. The softening crunch of toasty corn tortillas. Soul-satisfying broth. And creamy-rich avocado and cheese. A note about the pasilla (sometimes called negro) chile: Its unique flavor defines tortilla soup in central Mexico. In Michoacán, in west-central Mexico, it’s ancho chile. In your kitchen, it might turn out to be another chile, like New Mexico or even a little smoky chipotle (be forewarned that chipotle will make the broth quite spicy). Though for these everyday recipes I’ve relied heavily on the easier-to-use powdered dried chiles, finding powdered pasilla can be harder than finding the whole pod I’ve called for here. Should powdered chile be at your fingertips (be it powdered piaslla, ancho or beyond), replace the pod with about 1 tablespoon, added to the blender when pureeing the onion and garlic. In Mexico, it’s more common to crush toasted chile pods over the finished soup than to add chile to the base. You can follow that lead, or do both, as I do in my restaurants.

Goat cheese can replace the melting cheese. Rotisserie or grilled chicken can stand in for the raw chicken breasts (add it at the last second. Ditto for grilled duck breast or confit-style legs. Blue corn tortilla chips are delicious, though perhaps not as pretty.

Classic Tortilla Soup with All the Trimmings

A very simple recipe that shines with quality ingredients. I made my own chicken stock and used an ancho chile instead of a pasilla. Topped with homemade tortilla strips, lime, cotija, and fresh guacamole, this is a meal in itself.

Oh, I see the chicken in the ingredients! Sorry!

The recipe doesn't mention chicken in the ingredients list, but then later it refers to adding the chicken.