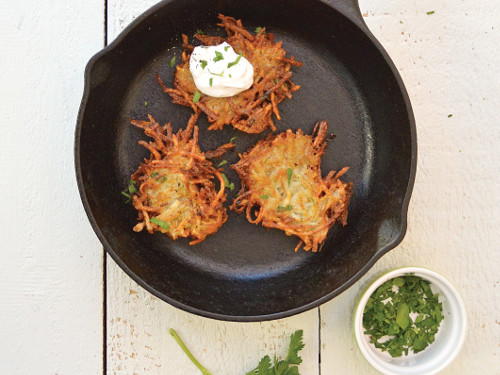 This image courtesy of Zsu Dever

These latkes are perfectly crisp on the outside and melt-in-your-mouth on the inside. The added potato starch increases their crispiness, but it is not essential. Some russet potatoes tend to be on the drier side, but to be safe, place them in a lint-free kitchen towel, fold up the edges and give them a good wring to remove excess water. Serve this the traditional way, with nondairy sour cream and applesauce.

Peel the potatoes and shred them using either a food processor with the shredding blade or a box grater. Place them on a kitchen towel, fold up the edges, twist the towel around the potatoes, and squeeze out all the water that you can. Place the potatoes in a large bowl. Shred the onion and add it to the potatoes. Add the aquafaba, starch, parsley (if using), salt, baking powder, and black pepper. Mix very well.

Although aquafaba is best if homemade using the recipe provided in the book, you can use aquafaba from canned chickpeas. Use the organic, low-sodium, canned chickpeas and strain off the liquid into a measuring cup using a fine mesh strainer. Note the amount of liquid you acquired, then add it to a medium saucepan and bring to a boil. Reduce to a simmer and cook until the liquid reduces by 1/3. Cool the aquafaba completely before using. 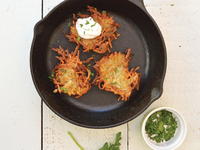