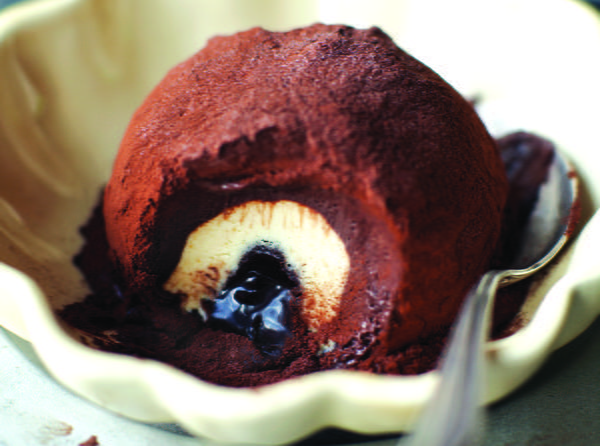 This image courtesy of Sarah Remington

The picturesque fishing town of Pizzo on Calabria’s Tyrrhenian coast is a mecca for ice cream fans, who come expressly to taste a dessert developed there. The town’s main square is lined with gelaterie (ice cream shops), all of them making the famous tartufo and claiming that theirs is the best or the only authentic one. As I discovered when I began trying to decipher the recipe, the shopkeepers are extremely competitive, even jealous, and disinclined to share any details with an outsider. Pizzo’s truffle mystified me for a long time. It is a molded ice cream dessert resembling a giant black truffle, with a cocoa coating concealing two layers of ice cream: a chocolate layer on the outside and hazelnut within. But the surprise is in the center, a molten fudge sauce that oozes like lava when you cut into the truffle. How, I asked myself, can a frozen dessert have a flowing interior? In the interest of research, I sampled the tartufo at several of Pizzo’s gelaterie. They varied only slightly, depending on the skills of the gelataio (the ice cream maker). “Play with the amount of sugar,” one gelataio told me when I asked how to keep the fudgy center soft. No one would be more specific. One July afternoon when a storm was brewing and few tourists strolled Pizzo’s main square, I struck up a conversation with the proprietor of Chez Toi, who was standing outside his modest gelateria watching the ominous clouds gather. He insisted that I come inside to taste his tartufo. As soon as I sat down at one of his little cafe tables, the sky opened up and rain began pelting the street in a downpour so furious that it was impossible to think of venturing out again until it stopped. Owner Vittorio Rigo, who had no other customers, eventually sat down with me and began revealing some of the tartufo’s secrets. He showed me his workroom, described how he shaped the truffles by hand, and confirmed that the fudge filling contained only cocoa, sugar, and water, although he would not reveal the proportions. At home in California, preparing to experiment with the filling again, I had a stroke of luck. While researching the history of Pizzo’s tartufo online, I stumbled on a document that Pizzo’s artisanal tartufo producers had written jointly. To protect their livelihood from the many imitators making Pizzo-style tartufi in Diamante and other Calabrian beach towns, they had banded together to define the official dessert and propose certification for Pizzo’s artisanal producers. (Only in Italy is ice cream taken so seriously.) The document did not give the recipe, but it did give ranges for the various ingredients, information that helped me devise a liquid-centered tartufo as good as any in Pizzo. Although Rigo showed me how he shapes the tartufo in his hand, I found this method awkward. Instead, I use a slope-sided glass custard cup lined with plastic wrap as a mold. Shortly before serving the tartufi, I unmold them, coat them with cocoa, and let them soften a little in the refrigerator so the ice cream will be silky and the filling properly fluid. Even the Pizzo producers don’t agree on the origins of their trademark dessert. Their document puts forth several theories. The most often repeated one attributes the tartufo to a Sicilian gelataio who opened a shop in the town and introduced the dessert in the 1950s.