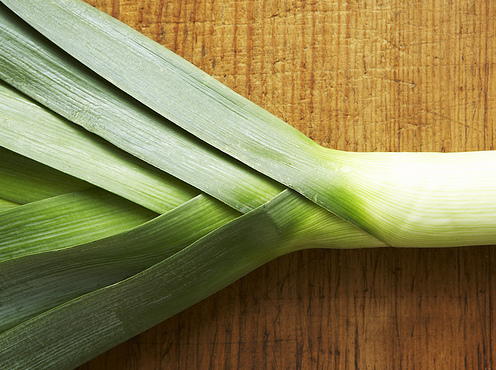 Editor's Note: Make this Leak and Potato Soup recipe for a rich, comforting, and filling meal.
If I had to choose one soup from among all my favorites, it would probably be leek and potato soup, potage Parmentier, named after the French agronomist Antoine-Augustin Parmentier, who developed the culture of the potato in France in the eighteenth century.
Leeks are essential to this soup; there is no replacement for them in this recipe. You can add a little onion, too, but leeks, potatoes, and stock are basically all you need. The hot soup is traditionally enriched with butter, and served with croutons and a sprinkling of chopped fresh chervil on top. If you don’t have chervil, substitute chives or parsley, but the chervil lends a special anise taste. When I was a kid, my mother would prepare a rough leek and potato soup, cubing the potatoes and not pureeing them. We would pour cold milk into the soup at the table, and that was how we liked eating it. The milk would cool the soup off a little and give it that nutty, buttery taste of milk. Many restaurants finish the classic Parmentier with heavy cream, but I tend to prefer it finished with a little sweet butter.
For many years the cold version of this dish, the classic vichyssoise, was known in the United States but not in France. It was created by Louis Diat, who included a recipe for it in a book he wrote in the 1930s as the executive chef at The Ritz-Carlton in New York City. I worked at the Plaza Athénée hotel in Paris in the 1950s, and the chef there, Lucien Diat, was Louis’ brother. The brothers came from the town of Vichy in France (famous during World War II for the temporary government of Henri-Philippe Pétain), and their mother used to make a creamy leek and potato soup and then serve it cold the following day with the addition of milk and chives. That recipe, which became known as vichyssoise in the United States, was also made at the Plaza Athénée in Paris because of the family history, but it was practically unknown in other restaurants at the time.
This is a simple, straightforward soup, and is a great first course when guests stop by unexpectedly. I like to use small Yukon Gold potatoes, which are soft and creamy, for this soup. A good, mild-flavored, homemade chicken stock that has been defatted is perfect for this soup. If the stock is strong, combine it with a little water. Pluche of chervil, meaning the whole leaf at the end of the chervil stem, is conventionally sprinkled on top of this soup. I like to place one pluche on top and croutons at serving time, but I also like to stir a little coarsely chopped fresh chervil into the finished soup to enhance the taste before adding the garnishes.
Potage Parmentier can be enjoyed not only hot, but with the addition of a little cold half-and-half and any leftovers can be transformed into a vichyssoise and served with chives on top.

Hi @deniceschnut: I understand that the directions for this recipe are a bit confusing. I believe that for the use of the milk in the ingredients list we should look to the headnote of this recipe, which reads: "We would pour cold milk into the soup at the table, and that was how we liked eating it. The milk would cool the soup off a little and give it that nutty, buttery taste of milk. Many restaurants finish the classic Parmentier with heavy cream, but I tend to prefer it finished with a little sweet butter." All best, Kara Rota Editorial Director

And when do you add milk? Can't find this in the recipe..