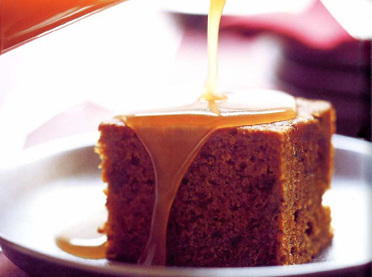 This image courtesy of Tina Rupp

This is my version of the ever-popular sticky toffee pudding, sometimes called sticky date pudding. The sweetness of the dates and toffee is offset by the spices and the coffee, producing a balanced date flavor, especially delicious in the winter months when warm, rich cakes are most comforting.

NotesStorage: This cake will keep, wrapped and at room temperature, for 4 days.

Steam--the leavening power of batters with a high percentage of liquids:

Once water is heated to its gaseous state (steam), it occupies vastly more volume than it does as liquid. All baked items are leavened somewhat as liquid turns into steam in the oven. Moist bread dough, in particular, rises well because the water is trapped in well-formed cells with strong gluten walls. Pate a choux, or cream-puff pastry, depends completely on steam and an intense heat to create those wonderful air pockets bakers and chefs fill with ice cream, mousse, and cheese.

A cake with a high percentage of liquid such as the steamed brown sugar and date cake featured here is leavened not only by baking soda’s reaction with the acid in the brown sugar, dates, and coffee, but also by the batter’s high liquid content.

Baking soda (sodium bicarbonate) does not act on its own to produce carbon dioxide; it must react with an acidic ingredient such as chocolate molasses, honey, fermented dairy products, juice, or vinegar or directly with added acids such as cream of tartar.

Chemical leavening agents cannot act alone to inflate baked goods. The baker must first create air pockets by stirring, folding, whipping, and beating the batter in its various stages. Carbon dioxide finds its way into these air pockets and, in the presence of heat, expands in these trapped spaces, leavening baked goods.