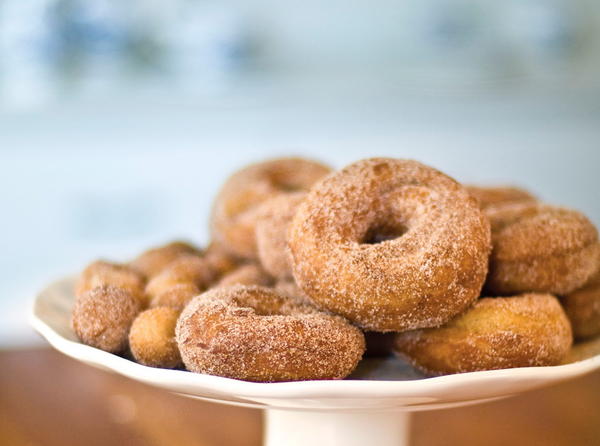 Editor's Note: This fall, bring the classic taste of apples to your breakfast table with this recipe for Apple House Cinnamon Doughnuts. Using cinnamon, nutmeg, and even rice milk and dairy-free margarine, you'll be able to whip up a batch of doughnuts that will be perfect for breakfast, snacks, and even dessert. Just don't expect any leftovers when you set out a tray of these doughnuts! Whether you're looking for a recipe that does not use allergens or simply want to try a new take on the classic recipe, these doughnuts are sure to delight. If you're serving these doughnuts for brunch, you can even add the author's recipe for Pancakes to the menu.

The Apple Haus, in Long Grove, Illinois, serves delicious apple cider doughnuts and apple pies. We stopped going there long ago because of John’s allergies, but I never forgot how much I loved those doughnuts. I was determined to develop a recipe that closely matched those sweet and sugary treats. This recipe is the result of that mission, and it is fabulous. My son was so excited-not only could he have a doughnut for the first time in his life, but his were just as good as those at the Apple Haus.

If you don’t have a doughnut cutter, use a 3-inch biscuit cutter instead. To make the doughnut holes, use an empty, sterilized round medicine bottle without the cap. Poke the hole in the middle of the circle, and down the hole will pop. This is a time-tested trick I learned from my mom.

We used to make these tasty donuts as a kid for cold winter mornings when you just could not shovel in another bowl of oatmeal. We loved when mom made them, and she always had a variety of toppings to keep them varied. I like the addition of the applesauce. My mom makes applesauce cookies and they are so tasty and moist.