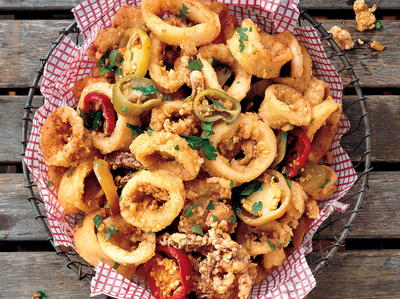 This image courtesy of Kate Sears/Sublime

Editor's Note: Get a whiff and feel for East Coast seafood with this delicious appetizer of fried calamari. Garlic butter and hot cherry peppers add a Rhode Island flair to this popular seafood appetizer, which can be served for a cocktail party, picnic or dinner for guests. Although known to be spicy and greasy, this Rhode Island-style squid has become popular all over the New England area. The largest squid-fishing fleet resides in Point Judith, Rhode Island. If you are lucky enough to ever eat a batch of this calamari, after being freshly caught from the waters off one of our smallest states of the region, you are in for an incredible treat.

If you think tossing crispy fried squid in a mixture of garlic butter and slices of hot cherry peppers is strange, welcome to Rhode Island! It’s unusual but addictively delicious. In recent years, Rhode Island-style squid has gained popularity as a regional favorite all over New England. When I first started serving this dish at Summer Shack, we would hear complaints once in awhile that it was “spicy” or “greasy”—which it was. So I changed the menu and called it just that, “Spicy and Greasy Rhode Island Calamari,” and I’ve never had a complaint since. Point Judith, Rhode Island, has the largest squid-fishing fleet on the East Coast; it is the hub of the squid business in the United States. The fleet follows the huge schools of squid all over the Atlantic, bringing them home to Point Judith for processing. The longest and best season is summer, but we see fresh squid periodically in the spring and fall too. When fresh squid is available, it is often reasonably priced, even when already cleaned. Frozen squid is available throughout the year, and its quality varies according to the packer and its place of origin. The most dependable brands are packed in Point Judith; you probably won’t ever see the brand in a retail market, but you can ask your retailer. A lot of squid is imported from China, some of it good, some of it tasteless and rubbery. If you have a good fish market, it will most likely sell you domestic squid. If you run across fresh domestic squid, I highly recommend you buy it. Look for medium-sized squid (about 8 to a pound) for frying. Smaller squid are good for stuffing, larger ones for grilling.

Serves4 as an appetizer

I will make its someday because my family like them alot