Art of the Slow Cooker 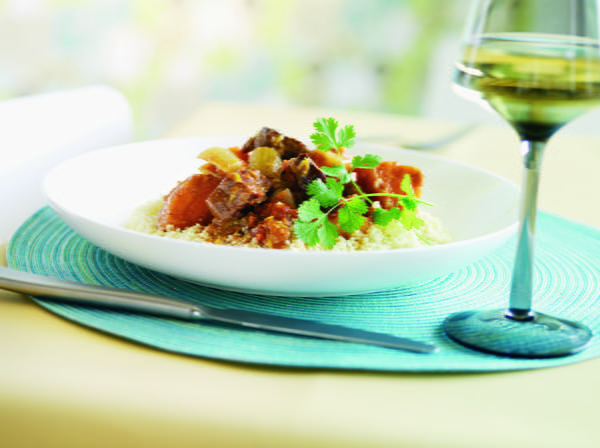 This image courtesy of Yvonne Duivenvoorden

The stews of North Africa are known as tagines (also spelled tejines), after the conical ceramic vessel in which they are traditionally made. The lid of a tagine is tall, causing the steam coming off of the stew to cool at its upper reaches and precipitate back into the vessel, so that none of the aroma or flavor is lost during cooking. This is exactly what happens in a slow cooker. The flavors in this tagine are classic Berber: cumin, coriander, cinnamon, and pepper, which have been cultivated for thousands of years by these ancient peoples in the mountain and desert regions of Morocco, Algeria, and Tunisia. Ground toasted almonds thicken the broth in the last minutes of cooking. The tagine is traditionally served with couscous.

• For chicken tagine, substitute boneless chicken thighs for the lamb and eliminate the allspice.

• Tagines can also be served on any small pasta, such as orzo or acini de pepe, cooked according to the package directions, or with toasted couscous (a.k.a. Israeli couscous, pearl couscous, or super couscous). To make toasted couscous: Heat 1 tablespoon olive oil in a large saucepan over medium-high heat. Add 2 cups couscous and sauté until lightly toasted, about 3 minutes. Add 3¾ cups boiling water and salt and pepper to taste. Reduce the heat to medium, cover, and simmer until the liquid is absorbed, about 12 minutes.